On the surface, neither Hollywood nor the WWE could script this any better. Within months of each other, viewers will have the opportunity to see not one, but two period royal dramas about a young female monarch struggling with both ruling and romance, with the star being a former Doctor Who actor (Jenna Coleman in Victoria and Matt Smith in The Crown).

First up is Victoria, the series currently airing on ITV (January 15, 2017 on PBS in America) about a young woman’s accession to the throne at the age of eighteen through to her courtship and marriage to Prince Albert. The second, The Crown, which will hit Netflix in November, stars Claire Foy as Queen Elizabeth II, a 25-year-old newlywed faced with the daunting prospect of leading the world’s most famous monarchy while forging a relationship with legendary Prime Minister, Sir Winston Churchill. 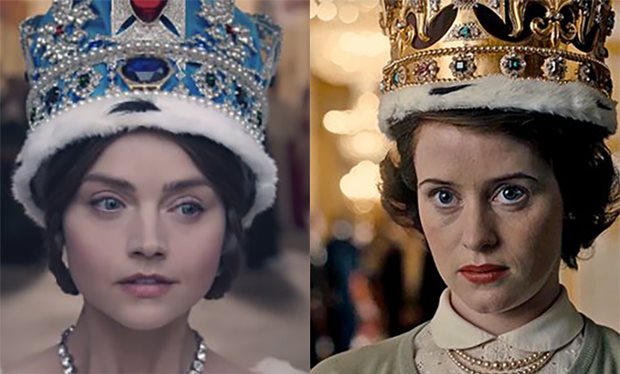 As a tune-up for it’s upcoming battle with The Crown, ITV’s Victoria faced the BBC’s Poldark in a head to head Sunday night main event semi-final match. While it wasn’t an easy, Victoria has been able to put Poldark away to the tune of about 200,000 more viewers per episode with both drawing just under 5 million viewers each which translates to a little over a 20% share of total TV viewing in the UK for each.

Eaton continued on the offensive with his belief that Victoria is merely re-hashing old news given the 2009 feature film, Young Victoria, starring Emily Blunt and Rupert Friend and written by Sir Julian Fellowes. He then did his best to deliver an early knockout punch by adding, “I think Victoria is slightly… I mean I just don’t think Daisy Goodwin is anywhere like the same league as Peter Morgan as a writer so I think it’s harder to achieve.”

Ultimately, the audience will decide. Both look brilliant. Both have star value and both are very well written. You be the judge.

The Crown is available on Netflix from the 4th November, while Victoria concludes on ITV this Sunday at 9:00pm and premieres on PBS beginning Sunday, January 15, 2017 at 9:00pET/8:00pCT.