After 21 long years, the classic ’90s show The Crystal Maze will return Sunday night at 9p on Channel 4 with a one-off special to raise money for Stand Up To Cancer. The joint national fundraising campaign from Cancer Research UK and Channel 4 raises monies to accelerate new cancer treatments to UK patients and save more lives, more quickly. Launched in 2012, Stand Up to Cancer‘s fundraising total has so far reached over £25 million to fund clinical trials across the UK.

For Sunday’s reboot of Crystal Maze, football legend and BT Sport presenter Rio Ferdinand, plus acclaimed actress Michelle Keegan (Coronation Street, Ordinary Lies), will be among the stars hoping to crack the crystal in this special edition of the legendary gameshow.

Completing the celebrity team will be TV and radio broadcaster Sara Cox, comedian and The Last Leg co-host Josh Widdicombe, plus Paralympics sprint champion Jonnie Peacock. AND, the most brilliant news of all, it has been confirmed that original series host, Richard O’Brien (a.k.a. Riff Raff from The Rocky Horror Picture Show), will definitely be making an appearance on Sunday’s special albeit in a cameo recorded video message role. Maureen Lipman, of Ladies of Letter fame, will also be appearing, taking on the role of ‘Mumsey’ the fortune teller. 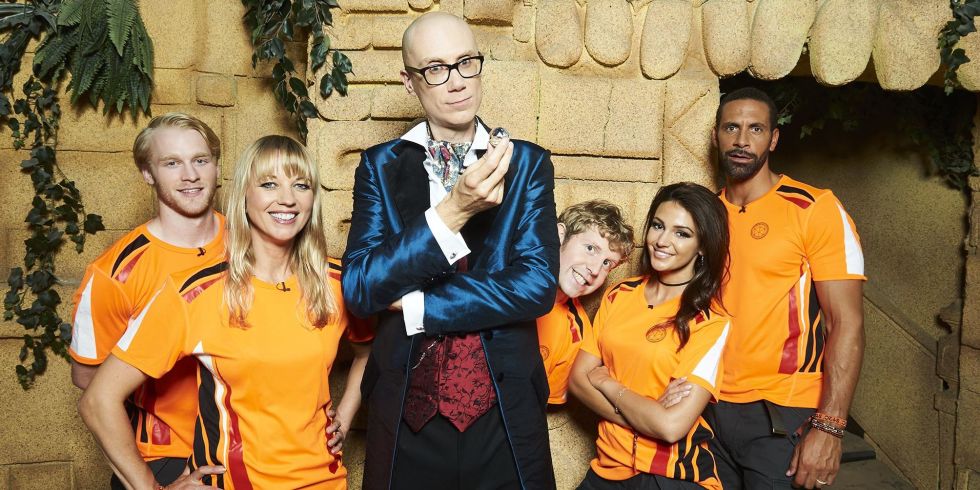 Merchant will guide his celebrity guests around the Aztec, Futuristic, Medieval and Industrial Zones before taking them to the Crystal Dome. Merchant said in a statement: “As a huge fan of the original series, I’m honored to support Stand Up To Cancer by hosting this one-off edition of The Crystal Maze. Richard O’Brien and Ed Tudor-Pole leave big shoes to fill, but I have size 14 feet, so I’ll do my best.”

And now, we get to see how Merchant stacks up in this first clip of the new host appearing alongside the original presenter Richard O’Brien and all the celebrities taking part.

For those too young to remember the original, initially, the show was intended to be a British remake of the French program, Fort Boyard, whose set was actually a real fort in the middle of the sea. Realizing that this would make it impossible to import, British producer Malcolm Heyworth decided to reinvent the show using four themed zones, representing various periods of  time and space, all designed to weave contestants through a myriad of physical and mental challenges in the categories of Physical, Skill, Mental and Mystery.

For those that do remember the first go-round of the series, I bet you can still picture the immense ‘Crystal Maze’ set, which featured four different zones, Aztec (ancient village amidst ruins), Futuristic (a space station environment), Medieval (a castle set where the host purportedly lived), and Industrial (a present day chemical plant). Each week, the team of six contestants took part in a selection of challenges in order to win ‘time crystals’, which were actually, golf ball-sized Swarovski glass crystals.

If the contestant failed to complete the stated challenge and exit the chamber in the allotted time, they would be locked in until the team captain opted to buy their teammates freedom at the cost of a previously-earned crystal, which could be done at any time after the lock-in. With a stated overall goal to collect ‘crystals’, each of which would give the team five seconds of time in the Crystal Dome, the heart of the maze, teams would then enter the dome to take part in their final challenge and, hopefully, win prizes.

While the weekly challenges were ‘challenging’, the set was brilliant. With every television show ever produced subject to remakes and reboots, I always wondered why, in this day and age of endless game and reality television shows, a series like The Crystal Maze was never remade (until now). One obvious reason was the gi-normous size of the set. The maze, itself, cost £250,000 ($350,000) to build and was the size of two football fields. The second reason, to me, was you wouldn’t have a host anywhere near the genius that is Richard O’Brien. That said, with Stephen Merchant, they’ve gotten pretty darn close!

The Crystal Maze airs Sunday, October 16 at 9pm on Channel 4.