“On the 23rd June, Britain voted to leave the European Union,” as the BBC has reminded us. “Then, on the 4th July, Nigel Farage, the man who had made it all possible, resigned saying he wanted his life back. But what sort of life has he gone back to, and how does a man forever in the spotlight fill his days now he has nothing to do?” 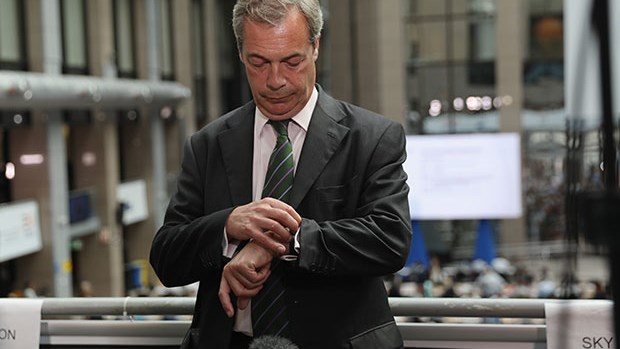 In a new BBC mockumentary, Nigel Farage Gets His Life Back, comedian Kevin Bishop will play an imagined version of the right-wing politician described as a cross between Basil Fawlty, the proprietor of the titular hotel in Torquay, and British politician and Conservative Member of Parliament, Enoch Powell. Farage struggles to deal with his new-found free time after standing down as UKIP leader all the while trying to cope with life ‘outside the limelight’. Obviously looking forward to his role as Farage, Bishop gushed, “Nigel Farage is the gift that keeps on giving”.

The title of the one-off BBC2 comedy comes from the line used by Farage when he stepped down after the EU referendum campaign and will also include a take on Farage’s German-born wife Kirsten Mehr, who learns, much to her dismay, that she now has to spend more time with her husband. As Farage struggles with what to do with his new-found free-time, here he fittingly struggles to advertise his own program.

Much like the recent one-offs of Young Hyacinth, Are You Being Served, Porridge and Goodnight Sweetheart, should Nigel Farage Gets His Life Back be successful from an audience standpoint, it could be made into a full series.