Sadly, these posts are happening with too much frequency these days. Jimmy Perry, creator and co-writer (with David Croft) on what’s is considered one of the most popular British TV sitcoms has passed at age 93. Voted #4 in the 2004 Britain’s Best Sitcom poll, Dad’s Army told the story of the British Home Guard during World War II. In England, the Home Guard was comprised of local volunteers who were deemed ineligible for military service either for reasons of age or being in a profession that was exempt enlistment. The Dad’s Army local Home Guard platoon would be on the front line in the event of an invasion across the English Channel. 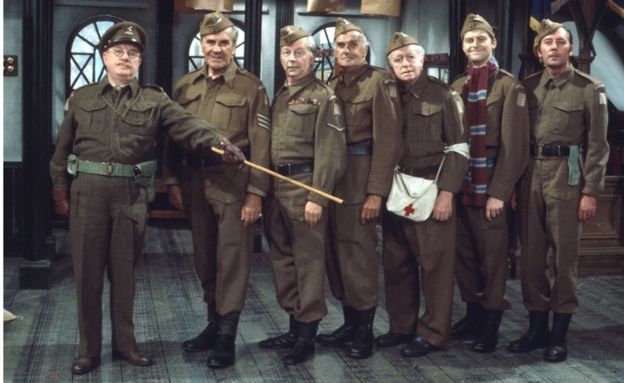 Running for nine series (80 episodes) and set in the fictional seaside town of Walmington-on-Sea, Dad’s Army featured primarily older British actors headed by Arthur Lowe as Captain Mainwaring. As did many writers of some of the most popular British situation comedies, Perry drew upon his own personal experiences in creating Dad’s Army. Too young to join up when World War II began in 1939, Perry joined the local Home Guard (the Local Defense Volunteers or LDV) where, in later years, he would base many of the characters of his creation on soldiers he met in real life. According to reports, Private Pike was based on a teenaged Jimmy Perry.

In addition to Dad’s Army, Perry also collaborated with Croft on It Ain’t Half Hot Mum, Hi-de-Hi and You Rang M’Lord?. While best known for his contributions to the world of British situation comedy, Perry was also an accomplished musical composer having composed the signature tunes to all of his creations. Best known was the signature theme tune to Dad’s Army, “Who Do You Think You Are Kidding, Mr. Hitler” for which Perry was presented with the Ivor Novello Awardin 1971 for Best TV Signature Tune by BASCA, the British Academy of Songwriters, Composers and Authors.