Today marks the 80th anniversary of British television as the BBC launched the nation’s first regular TV service at 3pm on November 2 1936, broadcasting live from from Alexandra Palace in north London. I am reminded, once again, why I continue to favor British television over their American counterpart. We turn to the British Comedy Guide and their reporting on a study compiled by the Press Association in Britain which has determined that a 1996 broadcast of Only Fools and Horses has the distinction of being the single most watched program in British television history. Over 24 million viewers tuned in to the 1996 one-off special “Time On Our Hands” to see the Trotters finally make their millions at auction, after discovering an extremely valuable antique watch in their storage garage. 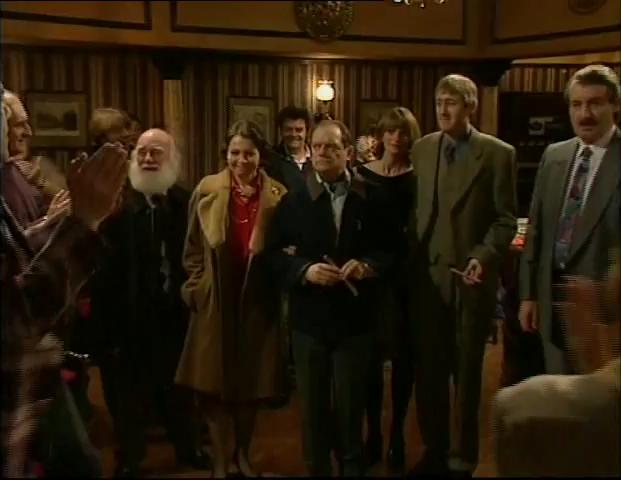 The recent study compiled figures calculated from Broadcasters Audience Research Board (BARB) data and historical information held by the BFI. To be included, the list represents single broadcasts only, excluding repeats. The Press Association’s list is comprised of program that were made especially for television with coverage of news and sporting events that would have taken place regardless of whether TV cameras were present, such as royal weddings and football matches, omitted. For example, the 1966 World Cup Final and the funeral of Princess Diana, both of which attracted more than 32 million viewers, are not included.

Comedy programs, almost all sitcoms, took 11 places in the top-20 list, with The Royal Variety Performance entertainment shows filling another four of the slots. John Sullivan’s Only Fools And Horses, which starred David Jason, Nicholas Lyndhurst and Roger Lloyd Pack appears in the list four times (2 in the top-10). Over half of the list includes programs that were broadcast in and around Christmas which solidifies the fact that the days around Christmas are some of the most important and most-watched from a television standpoint as compared to any other day.Anyone who’s anyone wants a special on Christmas Day in the U.K.

Even a 1980 episode of Dallas gets in there which, if memory serves me correctly, this would have been the “Who Shot J.R.?” episode. The most-watched factual program came in at #4 with the Martin Bashir 1995 interview with Princess Diana. The oldest program to appear on the list (#14 with 21.20 million viewers) was an episode of the Royal Variety Performance transmitted by ITV on November 10 1963, which featured a performance by The Beatles. Here’s a look at the top-10 with a complete list available here.

Oh, and why do I prefer British television over American television? Just one look at the list of the most-watched television programs in U.S. history and you’ll understand why. Nineteen of the top-20 most-watched of all time are Super Bowls with only the finale of M*A*S*H cracking the top-20, coming in at #8 with approximately 105.9 million viewers. Yes, I know that sport was omitted from the UK list but I seriously doubt it would have occupied 19 out of 20 slots had it been included. Thankfully, comedy is still king in the U.K.