Following the 2012 Olympics in London, Ian Fletcher (Hugh Bonneville) was a man without a purpose. As Head of Deliverance of the Olympic Deliverance Commission in Twenty Twelve, Fletcher’s herculean task was to organize the 2012 London Summer Olympics in the face of massive logistical difficulties, production errors, infrastructure problems and troublesome contributors.

It was not long after the closing ceremonies, however, that Fletcher found himself faced with the seemingly insurmountable task of shaping one to the greatest British institutions in W1A. As the new ‘Head of Values’ for the BBC, Fletcher, along with head of the brand consulting agency Perfect Curve and BBC Brand Consultant, Siobhan Sharpe, merely had to clarify then define, or re-define the core purpose of the BBC across all its functions. With the BBC faced with accusations of anti-Cornish bias, Flethcher must position the Corportion confidently for the future, in particular for Licence Fee Renegotiation and Charter Renewal in 2016 and 2017 respectively. 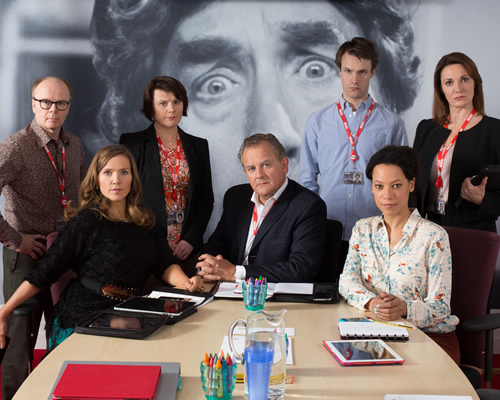 Premiering in 2014 on BBC 2, W1A is set to begin filming on series three in February 2017 with Bonneville returning alongside Jessica Hynes, Jason Watkins as Director of Strategic Governance, Simon Harwood, Sarah Parish as Anna Rampton and Hugh Skinner as Will Humphries, Ian’s intern/PA. Narrated by David Tennant, series two last aired in the Spring of 2015 and is only now able to ‘get the band back together’ due to the difficult schedules of the principle cast. No word yet as to the number of episodes to be filmed in series three but given the brilliance of the first two series and after a two-year gap, anything will be welcome.

The first two series of W1A will premiere on a number of public television stations beginning in early 2017 with series three set for BBC2 later in the year.