I don’t know about you but I’m ready for 2016 to call it a day. Already claiming too many from Planet Earth including Alan Rickman, David Bowie and, just this past weekend, Leonard Cohen and Leon Russell, 2016 has claimed yet another notable from the world of acting.

Known worldwide for his role as the suave spy, Napoleon Solo, in The Man From U.N.C.L.E., Robert Vaughn passed away over the weekend following a short battle with acute leukemia. From 2004 to 2012, Vaughn was brilliant in his portrayal of Albert Stroller in Hustle. Stroller led a group of confident artists in London who specialized in the ‘long con’. 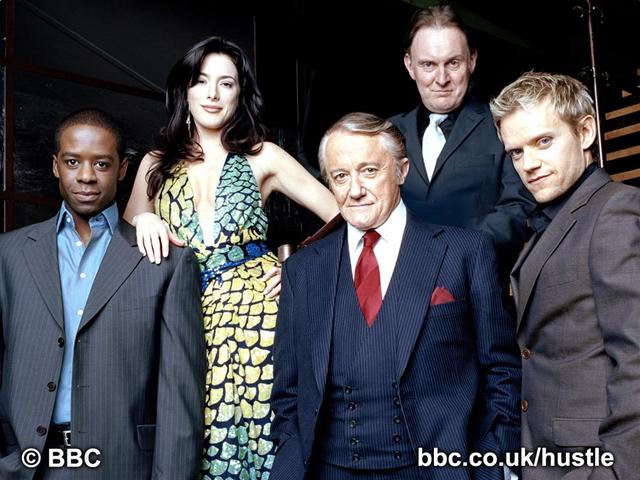 While the series was able to pull together an all-star cast of Adrian Lister (Michael ‘Mickey Bricks’ Stone), Marc Warren (Danny Blue), Robert Glenister (Ash ‘Three Socks’ Morgan) and Jaime Murray (Stacie Monroe), producers needed a strong character to be the ‘roper’ who would identify potential ‘marks’ for this unique family unit of grifters. The former Man from U.N.C.L.E. star was suggested for the role, met with producer Simon Crawford Collins over lunch, was offered the role and began filming the next day.

Aside from just being just plain good television, Hustle employed a number of interesting production techniques that just added to the sharply written scripts. It frequently broke ‘the fourth wall’ allowing actors to talk directly to the audience and each episode would include several cutaway scenes shot in a different style from the rest of the show allowing characters to appear to ‘stop time’ in order to interact with other actors that remained frozen in place.

Key members of the cast would then announce their intentions to the audience. These scenes would also allow the actor to further develop their “con” between themselves and other characters by discussing plans with either each other—or even themselves; while certain members freeze in place, others of the cast are free to move around the set and drink other peoples drinks and pilfer other peoples pockets and the like.

Pulling a page from the Ocean’s Eleven and Mission Impossible playbook, the genius of Hustle is that each episode would also include a confidence game played upon the viewers through the use of misdirection and hidden plot details that were revealed at the end of the story.