Given his trademark pipe, fondness of fine alcohol and reliance on godlike intuition in solving cases, the character of Jules Maigret is frequently referred to as the Sherlock Holmes of France. Having first appeared in print in 1931, Maigret is the creation of Belgian author Georges Simenon who wrote 75 Maigret novels and is considered one of the greatest writers of the 20th century, selling around a billion books worldwide to date. Simenon’s Inspector Maigret stories are not new to television audiences. As early as 1959, Jules Maigret hit the small screen in a major way with Rupert Davies starring as the fictional detective. The most recent and, perhaps, the more famous adaptation was the 1992-93 ITV series starring Michael Gambon which lasted 12 episodes and ran on PBS as part of the Mystery! series.

With his iconic heavy coat and his trademark pipe, Maigret returns to the small screen, with the brilliant Rowan Atkinson, once again, starring in the title role. The first film, “Maigret Sets A Trap” was not only visually stunning but Atkinson is brilliant. Set in 1950’s Paris, “Maigret Sets A Trap” is adapted from the Simenon novel ‘Maigret tend un piège.’ The second installment, ‘Maigret’s Dead Man’, based on ‘Maigret et son mort’ will transmit on ITV later in the year. 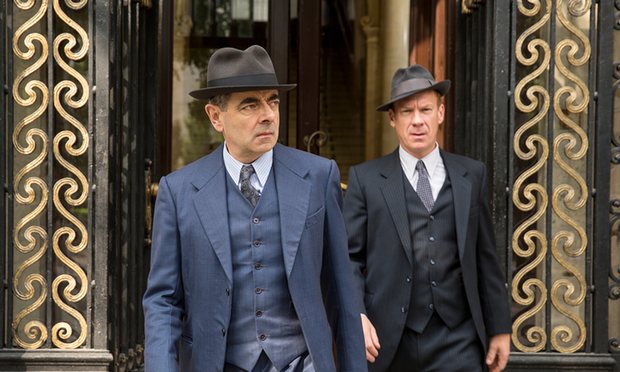 Based on both the audience reaction and critical acclaim for the first installment which aired in the UK last Easter, ITV commissioned two new Maigret films, the first of which has just recently gone into production in Budapest through February 2017. The films are targeted  for transmission later in 2017. The first will be an adaptation of Georges Simenon’s novel, ‘Night At The Crossroads’ while the second of the new films will adapt ‘Maigret in Montmartre’ set, once again, against the beautiful backdrop of 1950’s Paris.

According to ITV, “Night at the Crossroads” is a complex tale of murder, deceit and greed in an isolated country community. Maigret has been interrogating a mysterious Dane, Carl Andersen, for hours without a confession. Why was the body of a diamond merchant found in his car at his isolated mansion? He’s either innocent or a very good liar. What does his beautiful but vulnerable sister know? And what compels everyone at the Three Widows Crossroads to be so secretive? Maigret sets out to find his killer.

When Atkinson signed on for the title role as the insightful detective, he said: “I have been a devourer of the Maigret novels for many years and I’m very much looking forward to playing such an intriguing character, at work in Paris during a fascinating period in its history“. For those that only remember Atkinson from his comedic roles in Blackadder, Thin Blue Line and Mr. Bean, his periodic appearances for Comic Relief or for his more recent feature films as Johnny English, erase the notion from your mind palace that this doesn’t work. It does and it’s brilliant.