Ordinarily, I’m not a big fan of sketch comedy shows as most episodes are more often than not like a roller coaster with up and down sketches. Not a bad thing but more my opinion as I realize not every sketch, whether it be from Saturday Night Live, Little Britain or even Monty Python’s Flying Circus, can knock it out of the park.

Every once in awhile, however, there is video gold that comes out of a sketch comedy show that will live on in viral heaven and just too good not to share. Such is the case with the current Walliams & Friend sketch series of specials, which marks Walliams’ triumphant return to sketch comedy since the end of Little Britain almost a decade ago, which features a brilliant piece with the great Harry Enfield as ‘Queen Liz’. 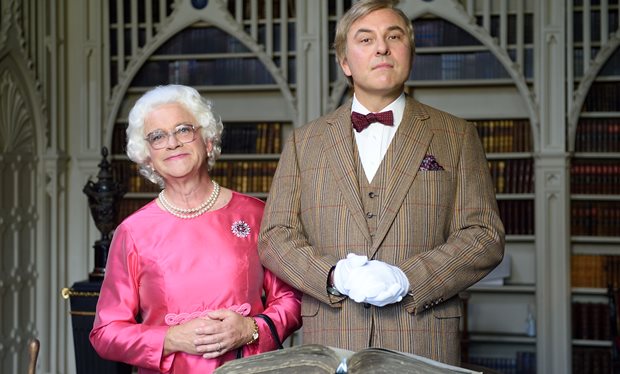 In a parody of the current BBC documentary series, Who Do You Think You Are?, Enfield portrays Queen Elizabeth complete with magenta dress, pearls that would make June Cleaver proud and lilac eyeshadow alongside a very staid David Walliams who acts as ‘One’s guide’ through a bit of family history. The Queen (Enfield) seems quite astonished that “one’s family tree seems to be chock-a-block with kings and queens” as he/she asks what her great grandmother did for a living! Another bit of greatness occurs when The Queen discovers she’s related to King George VI, she cries: “Shove off! From The King’s Speech? My father is Colin Firth?”

Of note: Stick around to the end. One’s sign off is priceless.

Walliams & Friend continues this Friday at 9:30p on BBC1.