It may be a signal to Sherlock and John that it’s not a game anymore but as with pretty much all of the brilliant mind palace teasers from the likes of Sherlock co-creators/writers, Steven Moffat and Mark Gatiss, so much is left up to the members of the Sherlock-nation as to what it could possibly mean! Both have become masters of misdirection when it comes to hints and teases for the series. After 6 years and 3 series, I have finally come to the conclusion that they actually enjoy toying with us as much as they enjoy creating Sherlock. 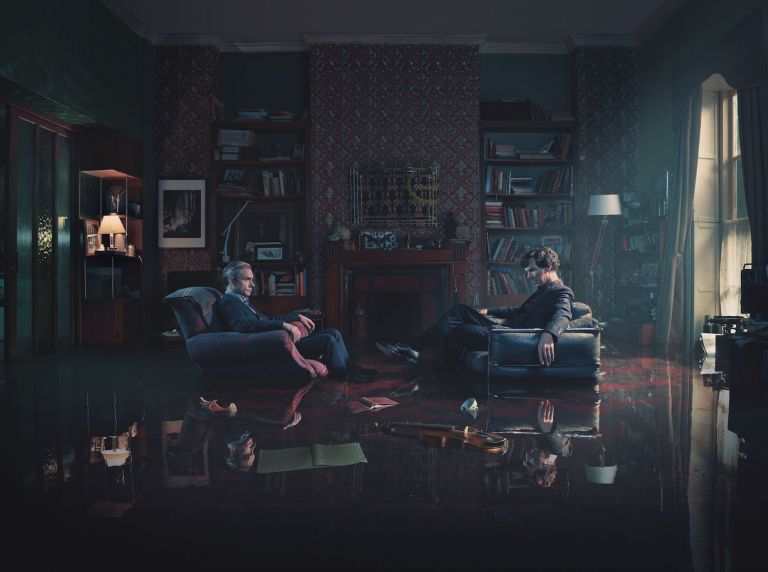 While the newest teaser spot shows Sherlock (Benedict Cumberbatch) and John (Martin Freeman) sitting in a flooded 221b Baker Stree with their old home together all but destroyed, the BBC has also revealed this intriguing synopsis: “One mysterious case in particular baffles Scotland Yard – but Sherlock is more interested in a seemingly trivial detail. Why is someone destroying images of the late prime minister Thatcher? Is there a madman on the loose? Or is there a much darker purpose at work? Something with its roots deep in Mary Watson’s past.” Arghhh!

Ever since 2 January 2016, the day after the broadcast of “The Abominable Bride”) which saw Sherlock and John head back to Victorian London (or, did they), co-writer Steven Moffat promising “…an emotional upheaval” for the show’s characters this series. “Series four is going to be about consequences,” Moffat hinted. “It’s dark in some ways – obviously it’s great fun and a Sherlock Holmes romp and all that – but there’s a sense of things coming back to bite you.”