Miranda Hart may not be returning to Poplar this Christmas when Call the Midwife returns but she will definitely be on everyone’s radar this holiday season as the star of the self-titled, self-penned and semi-autobiographical sitcom, Miranda, joins forces with her dog, Peggy, to recreate some of television’s iconic moments from 2016 for Alan Carr’s 12 Stars of Christmas beginning Monday on Channel 4. Comedian Alan Carr co-hosts this star-studded quiz program with his giant Advent Calendar in which celebrities compete to win presents for the studio audience (Spoiler alert…Miranda is behind Door #2). 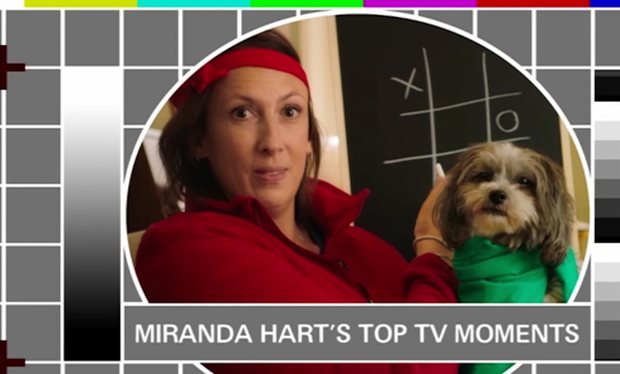 Armed with an extremely low budget which all but eliminates any chance for special effects or even production values, Miranda takes no prisoners and it’s quickly clear that nothing is safe and/or sacred from Game of Thrones to Sherlock to The Night Manager when it comes to Hart’s brilliance which, with the help of Peggy, comes full circle with her spot-on recreation of the resurrection of Jon Snow in Game of Thrones.

Alan Carr’s 12 Stars of Christmas premieres Monday December 19 and will air across five consecutive nights on Channel 4 at 10pm in the UK.