Evidently, someone forgot to tell the world’s most highly functioning sociopath that you should never work with kids or animals on screen. When the long-awaited Sherlock 4 begins tonight on BBC1 and PBS, Benedict Cumberbatch, Martin Freeman and Amanda Abbington seem to have hit the motherlode as both child and animal are part of the newest series. It seems as though the Watson’s not only have a child this go round but they have a bloodhound also. 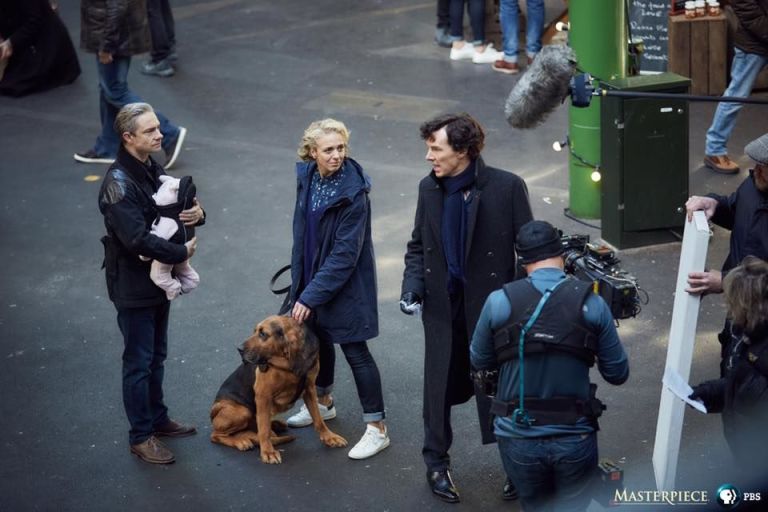 While, from all reports, baby Watson held its own alongside the formidable Sherlock cast throughout filming, the dog, maybe not so much. Sherlock star Benedict Cumberbatch recently recalled how co-star Amanda Abbington had a particularly tricky time trying to control the show’s new 4-legged cast addition. “We had an interesting dog in the first episode. He was very sweet but was a bit afraid of being in the centre of town, afraid of too many people and not great on hard surfaces,” said Cumberbatch.

“We were in Borough Market, with lots of people around, on concrete and tarmac. Cut to Amanda literally pulling a bloodhound around London who was supposed to pull her around London. That was fun.”

Abbington, who plays John’s wife, Mary, was a bit less kind as she admitted that the dog was so bad that they had to use a props boy to pull her along in the scene. Speaking on ITV’s This Morning, the actress said: “We worked with the worst dogs in the history of canine acting. They were truly awful. He looks great. He’s fantastic to look at,” she said. “But you ask him to do anything, he’s like ‘Nope’. He sat there.”

“He’s supposed to be on the scent of a trail. Sherlock goes ‘Come on, let’s go’ and he just lollops, just sits, just flops. We were filming in Borough Market. All these people were watching. I was holding him. I was literally pulling him and I fell over. One of the props boys decided to stand in … and I ended up getting pulled by a props boy. It was the most embarrassing thing.”

Sherlock 4 begins with “The Six Thatchers” on New Year’s Day at 8:30pm on BBC1 and at 9pET/8pCT on PBS. The remaining two episodes that comprise series 4 will air on Sunday, January 8 and 15 on both BBC1 and PBS.