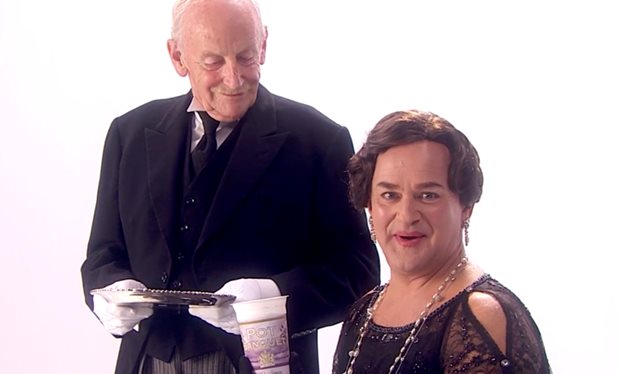 There is definitely something in the water when it comes to British actors that places them a cut above their American counterparts as it relates to stage and screen. Some point to the ‘formal’ theater training that makes them more than capable to handle both the most serious role one week and a drop-dead comedic role the next. Whatever the case, one only has to look no further than the former Earl of Grantham and the great Hugh Bonneville to understand where I’m coming from.

Whether it’s Bonneville’s 6+ year stint as Lord Grantham on Downton Abbey or his spot-on deadpan delivery playing Ian Fletcher as both head of the Olympic Deliverance Commission in Twenty Twelve and then Head of Values at the BBC in W1A, the BAFTA, Emmy and Golden Globe nominee is brilliant on both ends of the acting spectrum.

Never was this more evident than in the former Robert Crawley’s performance on a earlier this week episode of Walliams & Friends, the new sketch comedy series from the crazy mind palace of David Walliams. Whoever said a picture is worth a thousand words had this shot of Bonneville as Cora definitely in mind.

Bonneville played “Cora, Countess of Grantham” fronting an advertisement for a product called Pot Banquet – a ready meal which comes in a variety of flavors (such as shredded fox) and which is served by pouring boiling champagne on it. The comedy gold begins at approximately 27:40 into the video below.

As the story goes, ‘Cora’ was shown fronting the ad campaign because, sadly and obviously, Downton has now closed its doors and she has more time on her hands.

Look for Bonneville in W1A on a number of public television stations in early 2017.