By the end of Sunday night, members of Sherlock-Nation will soon be faced with the need to comfort each other. While we will be somewhat comforted in the knowledge that series 5 will happen, unfortunately, we will also face the fact that we have no idea when Sherlock, John, Mycroft, Mrs. Hudson, Lestrade, Molly and now, the newest member of the Holmes family, will be back on the small screen. 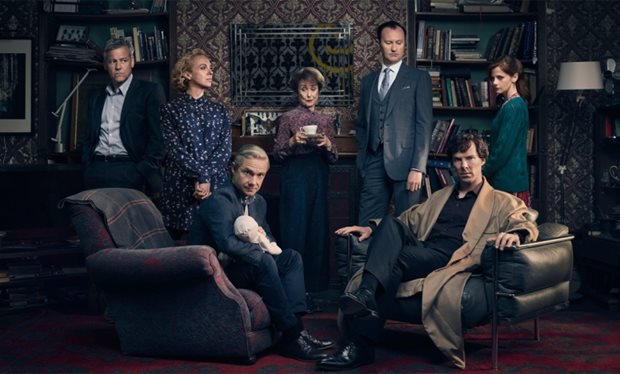 With the final episode of the fourth series set to broadcast on Sunday, 15 January, the realization that we may be faced with a two-year hiatus before we return to the bowels of Sherlock’s mind palace. If you have a calendar, that would be January 2019. BBC sources say that whatever happens we’re not going to get more Sherlock next January (2018) but, those same sources are “reasonably hopeful” of more Sherlock in two years’ time.

Sherlock showrunner Steven Moffat told this week’s Radio Times: “Right at this moment, we really don’t know about the future. Mark and I have to have a long chat, possibly on a train, about what we’d actually do with another run. We love the show very much, and that means we don’t want to let go of it before we have to. All of us involved know that days like these will never come again and we’re in no hurry to see them over.

“At the same time, because we love Sherlock the way we do, we don’t want to keep it going past its natural term. There was a fairly long time we thought series four might not happen. Then Mark and I sat down, got very excited about some ideas, and in time pitched them to Sue, then to Benedict and Martin. Only then, with  a clear view, did we all decide to get back to work. The same has to happen again — we have to be excited. We have to think of stories we can’t bear not to make.”

“Everybody’s schedule is difficult. Benedict and Martin aren’t just two of the finest actors of their generation, they’re stars, in demand everywhere. Sherlock can only ever be a passion project. So give us a moment and Mark and I will go back to [Arthur Conan] Doyle and see what we’ve missed. The game may still be on.” Moffat concludes in true Steven Moffat fashion, “Unless, of course, everybody dies at the end of series four.”

Sherlock “The Final Problem” airs Sunday, January 15 at 9p on BBC1 and 7pET/6pCT on PBS.