The ultimate BBC satire about itself is back…almost. The greatness of Hugh Bonneville and Jessica Hynes will be returning later this year in the brilliant W1A as filming is set to being next month and will, once again, follow nightmare PR Siobhan Sharpe (Hynes) as well as Ian Fletcher (Bonneville) and his team during and post Charter Renewal reacting to the BBC’s new mission statement of doing ‘More Of Less’. Head of Output Anna Rampton , played by Sarah Parish, describes this as being about “Putting what we do best front and center and about identifying better ways of doing less of it more“. 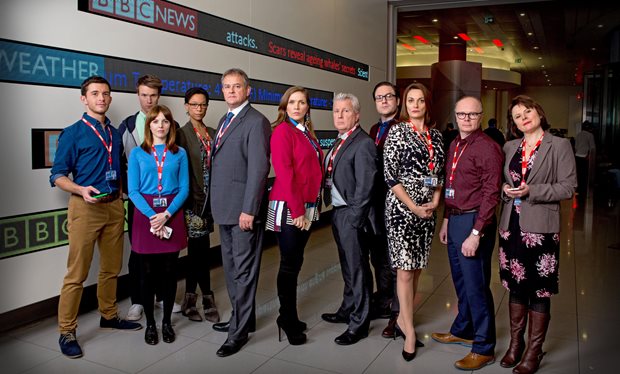 The new Royal Charter, which is the constitutional basis for the BBC, commenced on 1 January 2017.  It sets out the public purposes of the BBC, guarantees its independence, and outlines the duties of the Trust and the Executive Board. W1A writer, John Morton, certainly recognized the art imitates life timing of the series.

“It will put pressure on our characters in the fictional world which will be helpful,” says Morton. “2016 will be the time of charter renewal and what the BBC is for and how it is funded will be part of the national conversation and it would be good to be a very small part of that conversation. The show will never take a position, but W1A is written from a place where I certainly hope things turn out OK for the BBC. I think most people think about the BBC how you do about your parents. You don’t choose them and they may drive you mad occasionally, but you would be devastated if they weren’t there.”

Narrated brilliantly by David Tennant, the series has come dangerously close to reality when it comes to showcasing the sometimes unreal reality of the BBC. From the firing of Top Gear‘s Jeremy Clarkson to the leaked emails bemoaning the fact that the real BBC was dangerously close to running out of paper, there’s nothing they would shy away from.

While series 3 is set to begin filming next month and will be broadcast on BBC2 later this year, series 1 of W1A heads to public television stations in the States this month.