Perhaps the coolest show on the planet is BBC Radio 4’s Desert Island Discs, which premiered on BBC radio in 1942. Created by Roy Plomley, the format is about as simple as you can get. A guest ‘castaway’ is invited to choose the eight records they would take with them to a desert island.

In addition to the 8 records, guests are also asked to choose both a book and a ‘luxury’ item on the outside chance that would be marooned indefinitely. Since its inception, Desert Island Discs has invited over 3,000 guests to talk about their lives and tell of what would accompany them to a desert island.

Plomley hosted the show until 1985, after which it was presented by Michael Parkinson until 1988 and Sue Lawley until 2006. Today, in the hands of current presenter Kirsty Young, the show continues its reign as one of BBC Radio’s most loved programs with a weekly on air audience around 3  million. Desert Island Discs is also available as a podcast with iTunes and an extensive archive is available online, with episodes dating back to the 1950s available to listen and download.

On Sunday 29 January, BBC Radio 4’s Desert Island Discs will set sail into its 75th anniversary with former professional footballer and ex-England captain David Beckham as the castaway. Young says: “Seventy five is a birthday worth celebrating and having David Beckham as my Castaway seems like the perfect gift. His sporting legacy is of course extraordinary. And along with his charisma, cultural impact and humanitarian work, he is a modern man of many parts. He’ll be a fascinating guest to welcome on to my little interview island!” 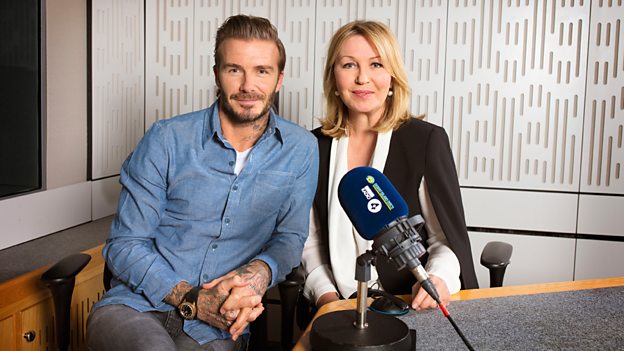 BBC Radio 4 Extra will begin the celebration on Saturday 28th January with a three-hour special beginning at 9a. In Desert Island Discs at 75, Young will showcase some of the program’s best moments, from Cilla Black talking about her early career, singing with The Beatles, and how a misprint in a magazine led to her changing her name, to Richard Dimbleby recalling being one of the first war correspondents to visit Hitler’s bunker after his death and taking from it an engraved cutlery set.

The special will also feature extracts from recently rediscovered episodes. Among these is Elisabeth Schwarzkopf’s interview from 1958, in which the soprano reveals why she famously chose seven of her own recordings, and from the same year is Roy Plomley’s second appearance on his own program in which he’s interviewed by Eamonn Andrews.

In total eight episodes will be restored to the Desert Island Discs archive this year, including silent movie star Tallulah Bankhead’s interview from 1964, BBC radio presenter Alan Keith’s from 1971, comedian Marty Feldman’s from 1968, and pianist Hephzibah Menuhin’s from 1958. A further nine extracts will be added to the archive, bringing Desert Island Discs’ fans more from the likes of actor Tod Slaughter who was cast away in 1955, as well as TV presenter Barry Bucknell, singer Moira Anderson, and musical theater writer Julian Slade, all of whom were cast away in the 1960s.

Beginning with Sunday’s episode, Desert Island Discs will also pay homage to the occasion by re-introducing the sound of sea wash to the opening and closing of the program for the first time since the 1960s.

Radio 4 Extra will also bring listeners a run of some of the most notable episodes from across the decades in Desert Island Discs Revisited, starting with conductor Sir Malcolm Sargent on 29 January at 10.15am. Following at 11:15a, David Beckham will be Kirsty Young’s castaway for this weeks program. An extended edition of the interview will be available online and to download as a podcast after transmission.

In addition, Desert Island Discs will continue its anniversary celebrations this year by making extended versions of some of the biggest interviews, which will be added to the online archive and available to download.

Off-air, the anniversary honors began on Tuesday, 24 January with a desert island sand sculpture outside BBC Broadcasting House. Hidden within the design – ready to be spotted by members of the public – will be some of the luxury items that castaways have chosen over the years.

Over the anniversary weekend, Radio 4 listeners will also be invited to join the celebrations on social media by sharing their favorite moments from Desert Island Discs using the hashtag #DIDat75.

Amazingly, the British Library discovered a number of editions of Desert Island Discs in their archive last year including 67 episodes that were missing in whole or in part from the BBC’s own archive. As they set about the herculean task of digitizing the lost tapes, unfortunately, in some cases, only the speech could been saved. Working with the BBC’s Desert Island Discs team, the BBC Gramophone Library and the BBC’s written archives at Caversham, where transcripts of each program have been preserved, the restoration process began. Salvaged were some amazing programs featuring Princess Grace of Monaco, Sir Alec Guinness and screenwriter, Dennis Potter.

Patricia Routledge – varieties of tea and a tea-making outfit
John Cleese – a life-sized model of Margaret Thatcher and a baseball bat
Felicity Kendal – Plays and Prefaces by George Bernard Shaw and Perfume
Terry Jones – The Complete Works of Geoffrey Chaucer and a pencil and paper
Rowan Atkinson – Uncle Fred in Springtime by P. G. Wodehouse and a car
Lenny Henry – Catch 22 by Joseph Heller and graphic novels (comics)
Geoffrey Palmer – a fly fishing rod (having interviewed him twice, this was no surprise)
Dawn French – Her daughter’s teddy bear (Awww….)

If you have more than a few hours of spare time, do yourself a favor and peruse the 70+ years of Desert Island Discs archives.