It must have been difficult enough to be the new person on the block and crash the Sherlock party towards the end of series 4 but it’s all in a day’s work for Sian Brooke. You may not immediately recognize Brooke from the series as she only played four different characters in a single episode of Sherlock, “The Final Problem”. 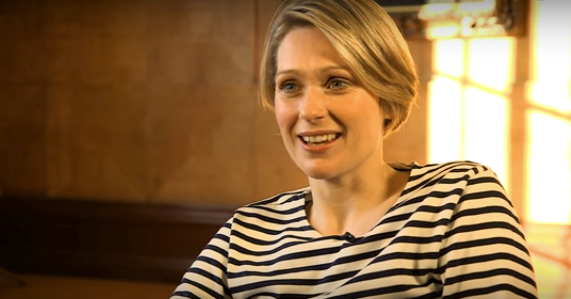 First disguising herself as John Watson’s Scottish love interest (the mysterious red head on the bus), then his Germanic therapist, followed by a northerner called Faith (who spent the night, figuratively, with Sherlock), and then brilliantly taking on the role of the mad, bad, dangerous woman behind them, Sherlock’s sister, Eurus Holmes, Brooke took time out to answer a few questions showing herself to be quite different from Eurus.

The original idea for Eurus was conceived far earlier than the last episode that she appeared in. It was  also on a bus, as Sherlock creators Steven Moffat and Mark Gatiss sheltered from the rain during the filming of series three finale “His Last Vow”. “The scene where Euros finally unveils herself, we’ve been sitting on that since we sat talking about it on the production bus… when we were shooting His Last Vow,” revealed Moffat at a Q&A following a screening of episode one from series four, “The Lying Detective”. “We’ve been talking about it ever since then, so it’s kind of weird that in few hours time we won’t have to kill people to keep the secret.”

Actually, Moffat and Gatiss have been foreshadowing the arrival of Sherlock’s sister for some time. You see, she’s named after a Greek god (a male one, unfortunately for her) who is synonymous with the ill-fated East Wind. If you dial it back to the end of season three and “His Last Vow’, Sherlock and John are saying goodbye for what could be the last time, the detective tells his friend “…the east wind takes us all in the end.”

If that’s not enough for you, remember when supposedly deceased arch-villain Moriarty suddenly rears his head again on screens around the country, asking “Did you miss me?”, Mary demands “How can he be back?”, to which John replies, “Well if he is, he’d better wrap up warm. There’s an east wind coming.”

Sherlock purists may remember that there is a precedent for this in the original Sir Arthur Conan Doyle stories, too. “His Last Bow”, Sherlock Holmes’s final adventure (chronologically speaking), took place in 1914 on the eve of the outbreak of the First World War. In the closing scene, the ageing Holmes warns Dr Watson “…there’s an east wind coming,” implying that it will take many lives”.

Let’s all hope that there is a series 5 so we can all find out what this particular ‘east wind’ might bring….