A new behind-the-scenes teaser for Doctor Who S10 confirms what many of us have known for some time but never actually seen in print — Missy’s back! Michelle Gomez, who is nothing short of brilliant in her portrayal of the current incarnation of long-time foe The Master, can be seen in the newest behind-the-scenes teaser for the series’ April 2017 return giving the TARDIS a fresh coat of blue paint. “Well they’ve got me back again. I’m hard at it,” she quipped. “Popping on the base coat – it’s a lovely colour of blue I’ve got.” 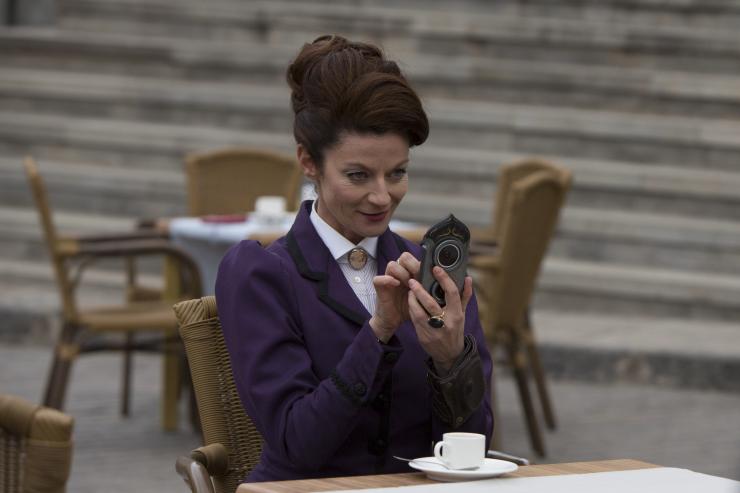 Missy was last seen in the two-part series 9 opener, ‘The Magician’s Apprentice’ and ‘The Witch’s Familiar’, in 2015. She was abandoned on Skaro, where she came upon a roomful of angry Daleks. I don’t know about you but it’s absolutely excellent to have the villainous Time Lady back for more, especially given this is to be Peter Capaldi’s final go round as The Doctor.

Since her last Doctor Who effort in 2015, Gomez’ Missy appeared in Class, the Doctor Who spinoff set at Coal Hill Academy, the school where The Doctor’s previous companion Clara (Jenna Coleman) used to teach.

There’s just something about the way she says it ‘begins with a T… and ends with an ARDIS’. But, when she adds ‘I’ll be coming out of this soon’, April can’t get here soon enough for me. You?