Just in case you are experiencing sleepless nights wondering just what does someone who works in television do on a Friday night in London? Well, they watch television, of course. Ok, admittedly, I did take advantage of the killer 60 degree weather for most of the day but am now back in the room after doing my best to contribute to the local London economy at what has to be my most favorite Thai restaurant on the planet. For those that are wondering, it has no name but it’s in the back of the Churchill Arms pub on Kensington Church Road in Notting Hill.

It appears I made it back to the room just in time as I flip on the TV and am immediately reminded of just how brilliant Graham Norton is. Tonight’s episode featured, in one show, Daniel Radcliffe, Ricky Gervais, Tom Hiddleston and the amazing Ruth Wilson (Alice from Luther). I had totally forgotten until Norton brought it up but both Hiddleston and Ruth Wilson acted together VERY early in both of their careers in the comedy series, Suburban Shootout. Both looked about 12 years of age! If you haven’t seen the series, I suggest you find it. 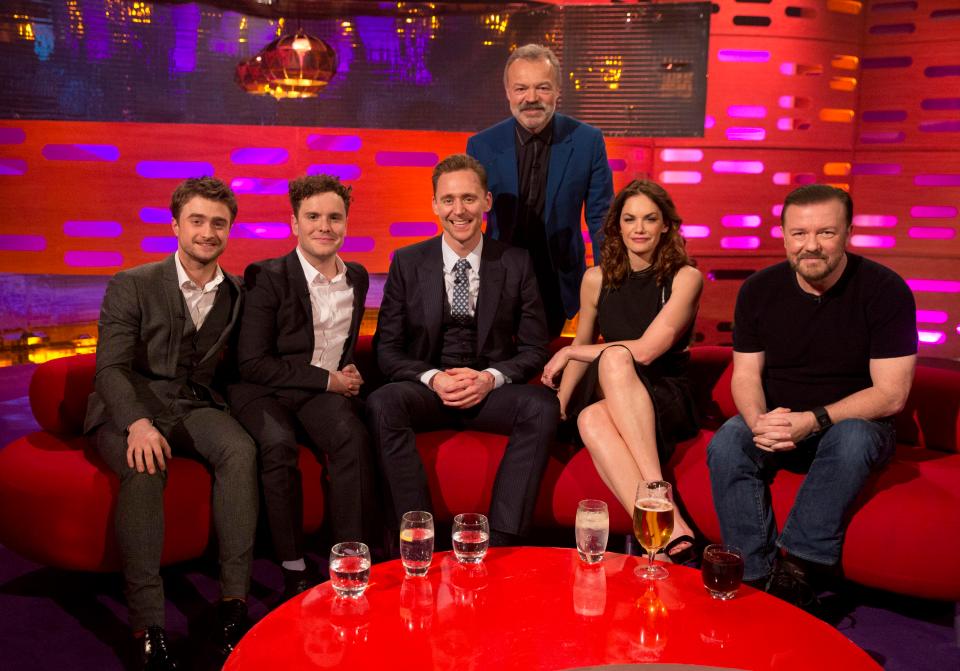 In America, latenight telly has been in turmoil ever since David Letterman ‘retired’. Things are beginning to look up as it appears Stephen Colbert has finally found himself and settled in to the nightly greatness that made him what he is from The Colbert Report on Comedy Central. Sadly, Jon Stewart is still gone, Craig Ferguson, sadly, has left the latenight building and Conan, as he freely admits, has been banished to ‘basic cable’.

Yes, Jimmy Fallon has no match when it comes to his musical prowess but, for my money, Graham Norton is still the king of latenight and is not to be missed. The Irish born television and radio presenter moved from the Channel 4 to the BBC back in 2005 where his current chat show, The Graham Norton Show, has aired on BBC 1 since 2010, taking over the Friday night slot vacated by Jonathan Ross.

Chat shows in the UK that somewhat mirror those found in the U.S. are few and far between with the major ones being The Graham Norton Show, The Jonathan Ross Show on ITV1 and Channel 4’s Alan Carr: Chatty Man.

As with a majority of British actors, Norton is brilliantly witty with an ability to keep the conversation moving along with quick witted questions and off-the-cuff side comments on all kinds of subjects. While his style of humor and dialogue does lean towards being a bit ‘innuendo-heavy’, he is able to pull it off without making it feel like you’re watching Hangover 2 or any one of the Anchorman franchise.

Anyone who is anyone finds their way to the red couches of The Graham Norton Show, whether you are from the UK or America. One of the great things about the show is that all the guests come out at once giving actors who may or may not know each other the opportunity to interact from the very beginning as opposed to the old school practice of bringing them out one at a time. Word of caution, if you’re in the audience, definitely stay away from the red chair!

Norton’s style is so comfortable that he gets his guest to do all sorts of things that they probably would wish they rather hadn’t done in hindsight. Who else could get Benedict Cumberbatch to do his best impressions of both Chewbacca and the late Alan Rickman and, even though he can’t, try to say the word ‘penguin’ on the show. Also, much to the delight of Colin Farrell, getting Daniel Radcliffe of Harry Potter fame to sing “The Elements Song” is priceless.

So, thank you to Graham Norton for not disappointing on my first night in London. On to Liverpool for BBC Showcase in the AM.