When series 3 of Broadchurch returns on 27 February, it’s fairly clear from the early look that this series will be delving into some pretty dark territory this time around as compared to the first two series. In an extended look from ITV, Olivia Colman’s DS Ellie Miller and David Tennant’s DI Alec Hardy are immediately confronted with former Coronation Street star Julie Hesmondhalgh playing rape survivor Trish Winterman which appears to happen immediately after she’s reported being the victim of a sexual attack. 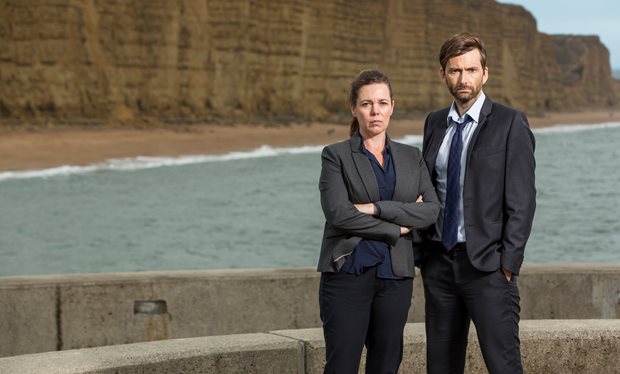 Broadchurch‘s third and final series is looking to be a sort of a reinvention of sorts for the show following an admittedly disappointing second season for many viewers, with David Tennant saying the new episodes are very different to what we’ve seen before. “Chris told us quite early on that that was his intention [to do the rape storyline] and it made sense that there couldn’t be another body on another beach. That wouldn’t have had the kind of truthfulness you expect from this series,” said Tennant.

Series creator/writer, Chris Chibnall recently told Radio Times that now is the time to take the series where it needs to go. “In the crime statistics alone there has been… an increase in reports of serious sexual assaults in this country and the dissonance between the number of crimes being reported and the number of crimes going to court and the number of guilty verdicts. This is all part of the mix. Plus, the general mood of the nation around these issues compared with five or ten years ago.” The drama has always concerned itself with the emotional impact of serious crime on ordinary people, he added.

While series one focused on identifying the killer of schoolboy Danny Latimer, the second series dealt with the trial of the main suspect and the fallout from that. Just in case you need a bit of a refresher on series 1 & 2, here’s a quick look back courtesy of ITV.

The third and final series from Chris Chibnall represents something of a clean slate with Tennant’s DI Alec Hardy and Colman’s DS Ellie Miller heading the investigation of a story without a murder. Arthur Darvill returns in series three in the role of Rev Paul Coates alongside Tennant and Colman.