Day one of the BBC Showcase 2017 in Liverpool is in the books. With thousands of hours to choose from to screen off the BBC catalogue, it’s no surprise that Tellyspotting gravitated right to the comedy genre on the first day of binge screening. 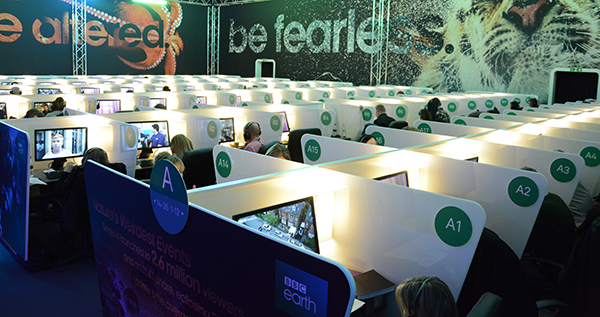 Much like their American cousins, the offerings display an array of up and down quality which makes our job all more difficult to find the gems to bring back across the pond for public television audiences. Some definite ‘day one’ highlights that should make their way to the States in the coming year…

David Mitchell, stars as William Shakespeare in this BBC2 sitcom written and produced by Ben Elton (The Young Ones, Blackadder, The Thin Blue Line). Focusing on the playwright’s life before he became famous, the storyline for Upstart Crow, revolves around Shakespeare’s personal and professional life and the rather surprising stories of where many of his ideas came from including his unlikely inspiration for Romeo. Harry Enfield co-stars as Shakespeare’s father, John, alongside Paula Wilcox (Man About the House) as his mother, Mary, and Liza Tarbuck as Shakespeare’s wife, Anne Hathaway.

The boys are back on board for a new series of Red Dwarf with Craig Charles, Chris Barrie, Robert Llewellyn and Danny John-Jules returning as Lister, Rimmer, Kryten and Cat, respectively. Looking to recapture the show’s ‘golden age’, series XI will see Rimmer accidentally saving the life of a Space Corps Captain, Cat takes some time off from being in love with himself to fall in love with a female cat, Lister wakes up only to find out a semi-deranged droid had stolen some of his body parts and Kryten has a mid-life crisis and considers leaving the RD crew for a younger one. To top it off, Kryten and Rimmer are labeled as illegal with American modern technology is outlawed.

In the new one-off, set in the late 1950s, a young Hyacinth shares a cramped cottage with her down-at-heel family and is forced to work as a maid for her father’s wartime RAF squadron leader. And, in very un-Hyacinth Bucket (not yet pronounced Bouquet) fashion, she even has to share a bed with her sisters Violet, Daisy and Rose. While Hyacinth has yet to meet Richard, her long-suffering husband played by Clive Swift in the original series, she is going steady with a young man called William.

Are You Being Served?

It’s 1988 and Young Mr Grace is determined to drag Grace Brothers into, well 1988, but he has a problem on his hands. Mr Humphries, Captain Peacock, Mr Rumbold and Mrs Slocombe all seem to be stuck in another era.

I Want My Wife Back

Murray (Ben Miller) is a bit bewildered when his wife Bex (Caroline Catz) walks out on their marriage on her 40th birthday. The series follows his attempts to discover what went wrong, why she has left him and how he can win her back. Reminding you a bit of another Ben Miller bit of greatness, The Worst Week of My Life,  I Want My Wife Back is a bit less a journey than a stumble in the dark towards the prize of returning his life to something approaching normality. Friends, family and colleagues are only too ready to offer advice to Murray about what he should do, and each episode sees him adopt a new strategy to achieve his goal.

Check back tomorrow for a look at some of the drama offerings that will be coming your way soon.