Aside from the brilliant series, I Claudius, it seems like an ‘Ides of March’ cannot pass without thinking of the classic BBC comedy, Up Pompeii, starring the late, great Frankie Howerd. The series, which ran only two short seasons back in 1969-1970, was written by and starred a number of Carry On film alumni, would probably have a hard time being broadcast today with its endless series of double entendres and sexual innuendos, although Are You Being Served still manages to find a home on public television stations in the States to a good degree of success. 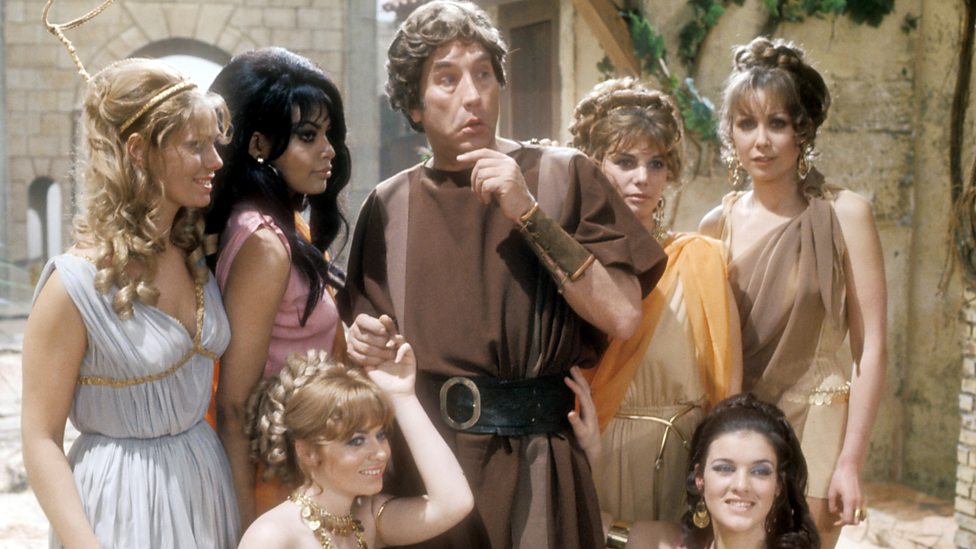 With some of Howerd’s inspiration for the series coming from the film A Funny Thing Happened on the Way to the Forum, the greatness of it centered around Howerd’s ability to depart from the script and play it up to the camera along with some extremely politically incorrect character names like Senator Ludicrus Sextus, his promiscuous wife Ammonia, daughter Erotica and his forever virginal son, Nausius.

Airing in April of 1970, episode 2 of series 1 begins with the Soothsayer interrupting poor Lurcio’s prologue as she was prone to do more often than not with a warning for all those within ear-splitting shouting distance to ‘beware of the ides of March’.  Talks of assassinating Caesar see Lurcio chosen as the one to carry out the plan. Ammonia overhears the plans and rushes to warn the Emperor, and a striking resemblance gives Ponderous an idea.

The fun thing about each episode of Up Pompeii was to see who popped up in each episode in the bit parts. For the ‘Ides of March’ episode, anyone recognize a couple individuals whose day job was working at Grace Brothers Department Store? At least they feel at home with the innuendos.

Take 30-minutes out of your day and celebrate the Ides of March with this episode of Up Pompeii. It will definitely be worth the time.