The independent regulator and competition authority for the UK communications industries, a.k.a. U.K. TV watchdog Ofcom, is considering launching an investigation into the content of the charity fundraiser, Comic Relief, following last Fridays broadcast of Red Nose Day. Among the content broadcast on the 24 March live TV event that was the target of a majority of the complaints was Russell Brand and Steve Coogan using language that wasn’t deemed appropriate, a game of Innuendo Bingo and a sketch involving Vic Reeves and Bob Mortimer and their interview of Good Morning Britain host Susanna Reid. 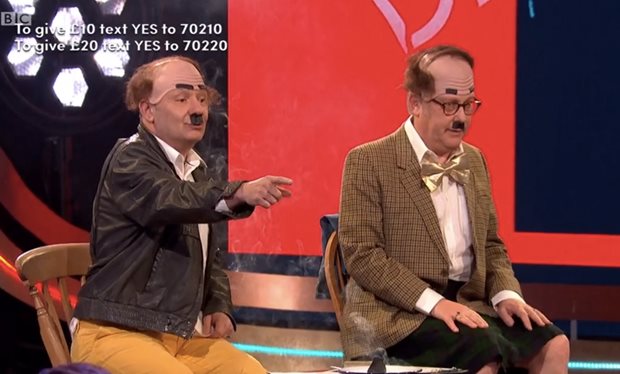 Some viewers complained about the sound quality of the program, although according to the BBC the majority of communication to Ofcom was aimed at the content of the broadcast that was deemed inappropriate for broadcast before the 9pm TV watershed. Much like the U.S. version of the 10p safe harbor hour, the U.K. TV watershed helps parents protect children from unsuitable material. In all but exceptional circumstances, programs before 9pm are suitable for general audiences including children. From 9pm they are progressively suitable only for adults.

Because children’s sensibilities vary as widely as those of adults, parents are expected to share responsibility in judging whether children should watch after 9pm. The BBC can be received in every household, but two-thirds of them have no children. The Corporation’s public obligation is to provide services for all licence fee payers, as well as those with children.

In addition to the three cited sketches, another moment that seemed to spark a greater than usual social media buzz was comic Russell Brand swearing live on air after a technical glitch. While press labeled the 2017 program, which did include the long-awaited ‘sequel’ to Love Actually, as being ‘dreadful and unfunny’, the BBC points to the fact that the broadcast audience peaked at 7.6 million and raised over £73m. “This will go a huge way to help improve the lives of many people both here in the UK and in some of the world’s poorest countries.”

£73+ million aside, Ofcom said in a statement: “We have received 151 complaints about Comic Relief 2017 on the BBC. We will assess these complaints before deciding whether or not to investigate.” Stay tuned, I guess.