It’s hard to believe but 2020 is just around the corner. Unfortunately, it’s getting closer by the day for the Japanese as organizers continue to prepare for the 2020 Tokyo Olympic and Paralympic Games. Aside from the traditional Olympic planning that takes place such as making sure there are venues built and ready to support the events and the sheer spectacle of the opening and closing ceremonies, Japan is struggling to make sure it has enough proficient English speakers to handle the onslaught of English-speaking visitors.

As do all countries that host the Games, Japan’s government and businesses want to use the Olympics to boost tourism and global trade and to present a positive image of Japan to the world. So the government needs to ensure a supply of English speakers to be Olympic volunteers and work in the accommodation, tourism, and retail industries. There is also a demand for professionals, such as doctors and nurses, to speak to visitors or competitors in English.

How Japanese Olympic organizers are meeting the issue head on might seem like they have taken a page right out of Ian Fletcher’s Olympic Deliverance Commission playbook as they were planning for the 2012 London Olympics. The BBC reports that while English is compulsory in schools, most speakers are far more comfortable in the written language rather than the spoken word as the school focus was more on grammar, vocabulary and writing, which are repeatedly tested in high-pressure exams. To close the gap, the classic BBC comedy series Fawlty Towers is being now deployed by some teachers in an attempt to give Japanese students an example of spoken English, as opposed to focusing on written language and grammar. 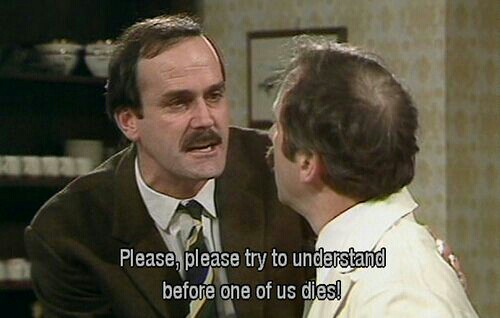 Japan’s government has been working very hard to bridge this English language gap. English is now taught in school from when students are eight or nine years old and remains compulsory for the next seven years. University students and school teachers have been sent on trips abroad to learn English, and many universities are giving language lessons to prospective Olympic volunteers.

There are even proposals to create an “English village” in Tokyo, populated entirely by English-speakers, where learners could immerse themselves in the language. Unfortunately, they have a long way to go and only until 2020 to get it right as Japan is currently 40th out of 48 countries on the Test of English for International Communication (TOEIC), and last year it fell from “moderate proficiency” to “low proficiency” on EF’s English Proficiency Index.

Helen Bentley, who worked on Tokyo’s Olympic bid, explains the reasoning behind the slow progress: “There are relatively few opportunities to use spoken English in Japan. As a result, many Japanese are much stronger at reading and writing than they are at speaking.” As a result, there are teachers trying a more imaginative approach to getting students to speak English – such as assigning students comedies to watch for homework. Teachers in Fukuoka Prefecture have been using Fawlty Towers and Red Dwarf to get students used to hearing spoken English.

Whether it works for the 2020 Olympics or not, it does make the prospect of a generation of Japanese students sounding like Basil, Sybil or even Manuel fairly interesting. And it would be kind of fun if Olympic visitors are greeted with phrases such as “He’s from Barcelona”, “Smeg” or “You’re a waste of space” during the games.