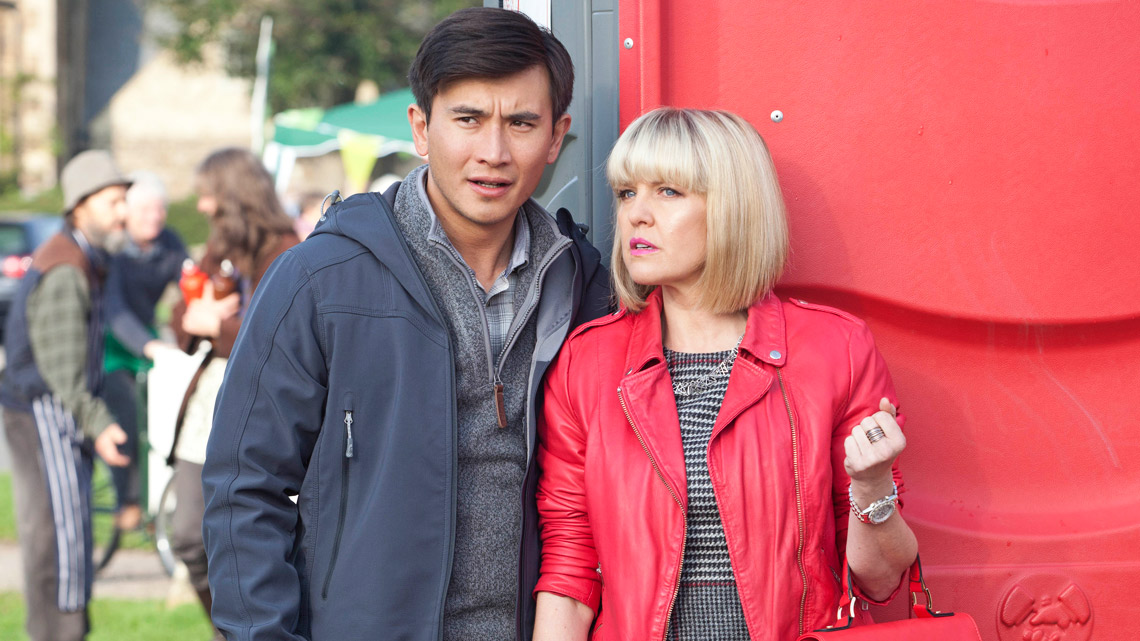 A frame from ‘Agatha Raisin’

With the Agatha Raisin series airing Saturdays at 7p on KERA in North Texas and on a number of other public television stations across the U.S. later this month, fans of Doc Martin, Father Brown and Death in Paradise are definitely going to love this series! A cross between Doc Martin and Prime Suspect, the quirky crime drama stars Ashley Jensen (Ugly Betty) as ‘the Cotswolds equivalent of Jane Tennison, Agatha Raisin.

In last nights premiere program, Agatha Raisin and the Quiche of Death, we saw Agatha retire from her profitable position as a PR agent in London. She moves to the Cotswolds expecting a peaceful country life. Just how does one try to fit in to the local community? Obviously, you enter a local baking contest with a quiche bought in London. Not wanting to go the spoiler route, let’s just say her quiche kills one of the judges. Desperate to prove her innocence, Agatha begins investigating the crime herself.

Recently, we had the good fortune to be able to catch up with the ever-so-busy M.C. Beaton, the Glasgow-born creator/writer of both the Agatha Raisin and Hamish MacBeth mystery crime novels.

Tellyspotting: You once mentioned that “You need to love books to write them”. Where did your love of books come from?

M.C. Beaton: “My love of books came from my parents. I am old enough to be just pre-television. My parents, brother, sister and me would sit round the fire in the evenings with our pile of books at our feet. You’ve got to love books to write them because the brain is like a computer and you can only put out what you put in.”

TS: Can you briefly describe your writing process when you sit down with a story idea?

M.C. Beaton: “I sell the plot to the publisher in advance so I always know what I am going to write. I notice you say ‘sit down.’  As Agatha Christie once remarked, people always seem to think that sitting down is all you need. Your brains aren’t down there!”

TS: Agatha is turning 25 this year. That’s a lot of murder’s to come up with for a small village in the Cotswolds. Have you even pulled from real events for any portions of Agatha’s adventures?

M.C. Beaton: “I never use real events for Agatha’s adventures but places and people spark ideas. For example, at the hairdresser. Have you heard how people will shout about their private life under the driers? Good place for a blackmailing hairdresser.”

TS: The two things I love about the Agatha Raisin character are that one, she’s female and two, she isn’t the tormented male DCI that you wonder if they are going to take the law into their own hands and turn into a killer at some point. It’s almost a ‘comfortable’ crime drama and one that a majority of readers and viewers would rather relate to. Can you comment on how you created Agatha?

M.C. Beaton: “I think of myself more as an escape artist than a writer. I was first inspired to write a detective story because I really didn’t read much else. At that time, there was nothing really between romances and the Pulitzer Prize, no comfort books for a wet day or a bad time.  So, I write what I love to read – village mysteries. I also like anti-heroes and I wanted to create someone you might not like but would want to win through in the end. Someone non-politically correct, infuriating and vulnerable.”

TS: Is there a little bit of M.C. Beaton in Agatha or vice versa?

M.C. Beaton: “I think there’s a bit of me in Agatha. She says a lot of the things I would like to say but I am too polite. I don’t smoke or drink but sometimes I feel I could kill for a fag so Agatha smokes for me. And kills people for me.  I like bumping off nasty people.”

TS: Can you imagine how it would play out if Agatha and Hamish worked on a crime together?

M.C. Beaton: “I don’t think I can possibly imagine Agatha and Hamish meeting. They are both shaped by geography. My mind boggles.”

TS: Did you have much, if any, involvement into the creation of the Agatha Raisin television series?

M.C. Beaton: “I didn’t have much say in Agatha for television. Thankfully, I was pleased with Ashley Jensen’s interpretation for the part. She may not look or sound like the Agatha of the books, but she acted her character. I begged for family viewing and got it. Have you heard the one about the dumb but ambitious actress who slept with the writer to further her career? Writers are the bottom of the food chain.”

Agatha Raisin airs Saturdays at 7:00p on KERA TV in North Texas. Look for the series to begin on a number of public television stations across the U.S. this month.