They say a picture is worth a thousand words. In the case of the picture below of Victoria and Albert, it’s certainly worth at least a thousand, if not more. Daisy Goodwin, the creator/writer of Victoria, says the course of true love won’t run smooth for Jenna Coleman and Tom Hughes when series 2 hits the small screen this Autumn in the UK and in January 2018 on PBS in America. 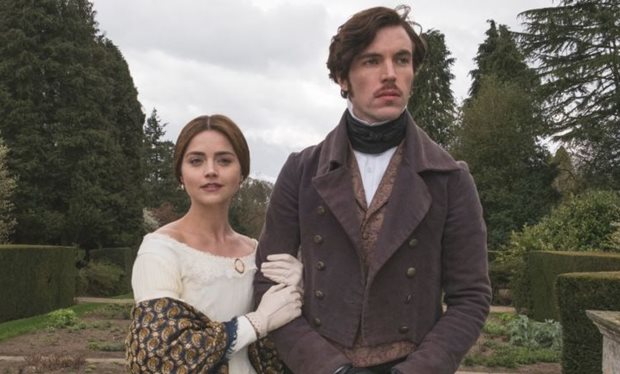 When last we saw Queen Victoria at the end of series 1 last Autumn on ITV she had just given birth to a baby girl but when we catch up with her in series two the monarch won’t exactly be playing house.

“Victoria and Albert are facing the challenge of being new parents and Victoria is not very keen on motherhood,” series creator Daisy Goodwin told RadioTimes.com at the BFI & Radio Times Television Festival. But it sounds as though her lack of maternal instincts won’t be the only thing troubling the queen when she returns to the telly this Autumn.

“The situation in the country is very dicey, there’s the biggest depression there’s been for twenty years, there are political movements calling for the abolition of the monarchy, there’s unrest in Ireland, there is all kinds of, there’s warfare in Afghanistan, it all sounds quite familiar, doesn’t it?”, Goodwin added. “It’s a time of great unrest, personal unrest and political unrest. What could possibly go wrong?” She then brilliantly summed up series 2 by saying, “Watch out for flying objects!”

The big questions for Daisy is whether or not Lord M will be back! He was still Prime Minister until 1841, after all. When asked at the BFI & Radio Times Television Festival, Goodwin charged the audience with doing a bit of detective work that would make Sherlock proud.

“Do you know, one of the great things about writing this series is that we seem to have transformed a hitherto fairly obscure Prime Minister into the subject of enormous interest and, dare I say, fan fiction,” Goodwin said. “And all I can say to you is that if you really want to know the answer to that question, I suggest that you go and buy a very, very good book about Lord Melbourne by David Cecil, it’s out of print but you can get it at your local library, and that may help you try to understand what’s going to happen in series two.”

Victoria S2 returns and the fun begins this Autumn on ITV and in January 2018 on PBS in the States.