Never mind the fact that Broadchurch is a series filled with rape, murder, small-town intrigue and dodgy locals. Last month, with one grisly image during an episode of Broadchurch, David Tennant sent millions of fans into orbit. The image of DI Alec Hardy placing a cup of tea in the microwave. A microwave of all things! 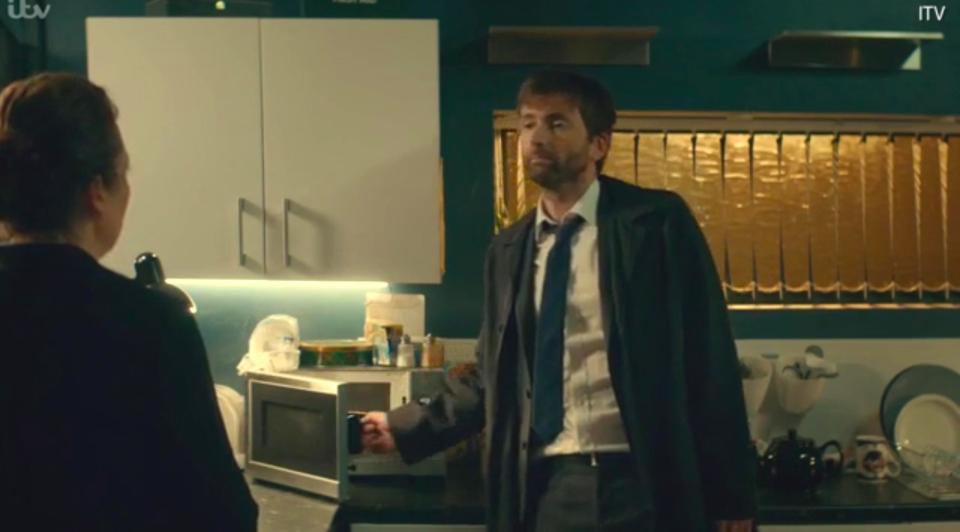 It was definitely the beginning of ‘tea-mageddon’ for many fans of the series who expressed their outrage across social media who thought that DI Hardy was actually making tea in the microwave as opposed to merely warming up tea that had been left to cool. Yes, Hardy was seen placing a mug of tea in a microwave but, was he ‘making’ or ‘warming’. Amazingly, the ‘great tea debate of 2017’ still rages on.

While loyal Broadchurch fans flooded Twitter to vent, Hardy even found himself in hot water with DS Ellie Miller, played by Olivia Colman, who was left a bit dazed and confused herself when the senior detective failed to use the kettle to brew up. As Hardy pulled the cup from the microwave, DS Miller immediately asked, “Are you really going to drink that disgusting stewed tea?” which suggests Hardy was merely warming his tea as opposed to making it. Not so fast, however, as we next see Hardy grab a carton of milk from the fridge, smell it and pour in the mug which might suggest he was making tea not warming up anything from the night before.

Tea purists who know the value of a ‘proper cup of tea’ were outraged. Others, not so much. In an attempt to calm the waters, popular foodie blog, Food52, dug up a 5-year old research study that actually hints that those ok with Hardy’s efforts may actually have a leg to stand on.

In 2012, Dr. Quan Vuong, a food scientist at Australia’s University of Newcastle (and microwave master), conducted multiple experiments that concluded microwaving black and green tea may be the most surefire way to activate its most desired chemical compounds—certainly more than the traditional stovetop method would yield.

In the study, published in the Journal of Food Composition and Analysis, Dr. Vuong determined that the microwave method coaxes out 80% of the tea’s natural catechins (antioxidants) and 92% of its caffeine content, compared to the measly 62% and 76%, respectively, gained from steeping tea leaves in kettle-boiled water for two to three minutes.

So, while this leaves us with scientific proof that microwave tea makes for a more nutritious cup of tea, the proof that it is more delicious, well, I think this might just be an argument you aren’t going to win, science or no science.