The brilliant series, Grantchester, is set to return this Sunday on ITV for its dramatic third series. Unfortunately, U.S. fans of the series will have to wait a tad bit longer as PBS will not premiere series 3 until Sunday, June 18 on Masterpiece. Judging by the most recent trailer released by ITV, James Norton’s Sidney Chambers will not have an easy ride and I’m not talking about his bike either. Fans of the series will, no doubt, remember the tense series two finale where we were left wondering what will happen to Sidney and Amanda’s (Morven Christie) new found romance. Given they finally declared their feelings for each other, Amanda finds herself unable to accept the future that lies ahead and leaves Guy, is disowned by her father and turns to Sidney for real. And that was just one episode! 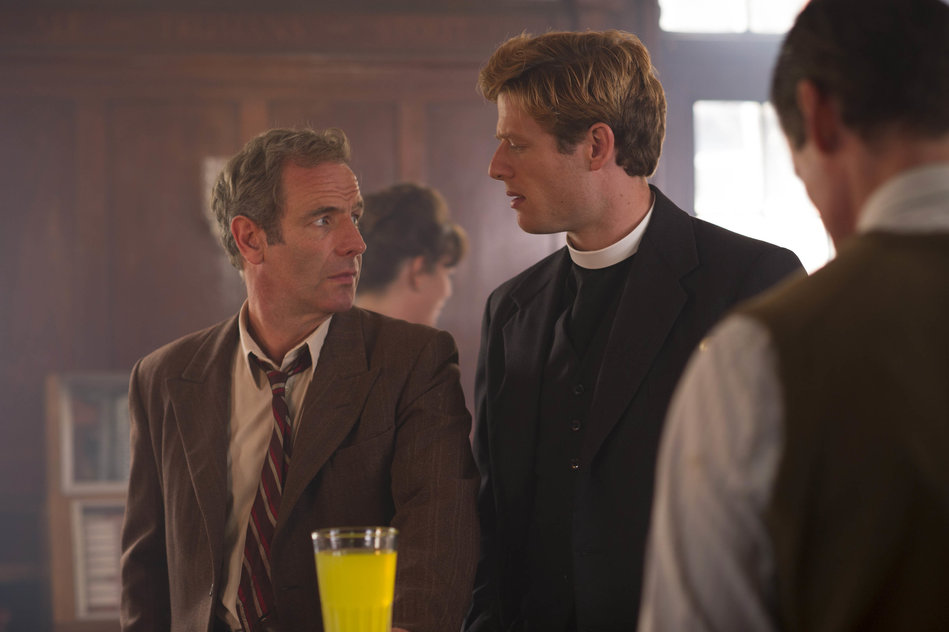 As Sidney makes a choice that could very well alter his standing with the church, the series 3 teaser gives us a glimpse of what’s to come as what appears to be a higher-up clergyman tells Sidney that the faith must “…put duty above their own needs” and “…lead by example”. Then the vicar-detective’s affair with Amanda flashes on screen teasing there is more to come from the scandal. It also looks as though someone is threatening Sidney as he questions down the phone: “Why are you doing this?“

Even police pal Geordie (Robson Green) chimes in with his two cents worth as he tries to catch out Sidney, saying: “When a man is close with a woman, it’s always more than friends.” Speaking from experience, Geordie has his own issues to deal with in series 3 as it seems like his affair with Margaret (Seline Hizli) will also heat up as Geordie protests that their relationship isn’t “a fling”. The question of the day is will Geordie end things with Margaret before his hapless wife Cathy, played by Kacey Ainsworth, learns the truth.

Not to worry, however, as the usual number of gripping murder mysteries that the show has become famous for will continue to plague Cambridge but the £64K question will be whether or not Sidney and Geordie will be able to put their love interests to one side to protect Cambridge from dangerous criminals.

Grantchester S3 begins Sunday on ITV and returns June 18 on PBS in the States.