In World War II, when husbands, fathers and brothers went off to war, it was the women left behind who were charged with supporting each other to keep the community going. In Home Fires, which is concluding its final run on ITV1 in the UK and on PBS’ Masterpiece series, the women of the Great Paxford Women’s Institute help to maintain the nation’s fabric during its darkest hour. 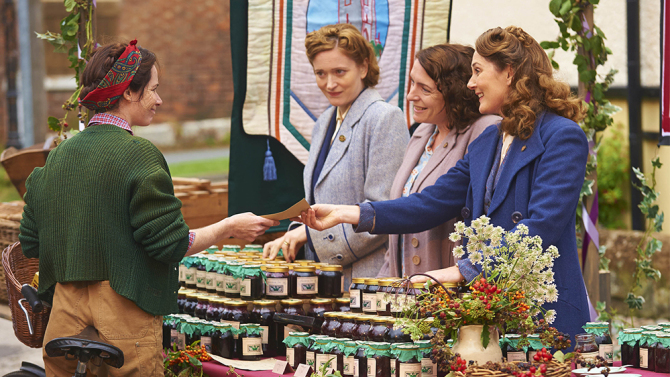 Based on Julie Summers’ brilliantly inspirational book, “Jambusters: The Story of the Women’s Institute in the Second World War”, we are introduced to a group of women in rural Cheshire who are increasingly affected by the impact of the war being fought on mainland Europe.

Starring Francesca Annis and Samantha Bond, Home Fires tells the story of the women that while they may be far from the horrors of the front and the fighting, live under the shadow of the Second World War which looms like a dark cloud over their lives. As the story plays out, there are mini-wars on the homefront as tensions mount and individuals fight for control. It’s not until the women realize, through the work of the Women’s Institute, that by working together just how powerful they can be in keeping their world from falling apart around them.

While Home Fires is set in Cheshire, it is also filmed there. The series was shot in Bunbury village which knows the effect of World War II all too well. In 1940, the village was attacked by a German aircraft returning from a night raid on Liverpool. The plane dropped surplus bombs over the village, destroying shops to a point beyond repair. As with a number of series that film extensively on location throughout the UK, visitors to Cheshire can learn more about the history of the village while visiting the various locales featured in the series.

Fans of the show can take a walk around the area, learn more about the history of the village and explore the setting of the series. Local butchers R.P Burrows is used on screen in the series, as are many streets and local farms. Other attractions include the beautiful St Boniface church, dating back to the 14th century, which houses wall paintings of saints and monuments of important figures from the area.

Visitors can also explore the nearby water mill, built in 1844, take a walk along the pretty Shropshire Union Canal, or hole up at one of the many drinking establishments in the area. The cast and crew particularly enjoyed Tilly’s Café, The Dysart Arms, The Cholmondeley Arms, the Yew Tree Inn and the Nags Head pub. Personally, I’d suggest starting your journey at the Nags Head pub but that’s just me.

A gentle reminder that Home Fires will soon return in novel form as the creator/writer of the ITV series, Simon Block continues the story that needed to be told. As reported recently on the petition site, there will be 3 books in the series with each book being released in 4 parts, first in ebook format and then the complete paperback. Full details of the migration from telly to book can be found at www.savehomefires.com/books.

The first of the three novels, “Keep the Home Fires Burning”, is set to pick up from the jaw-dropping finale of the second series, which both UK and American audiences will soon experience within the week when series 2 concludes on both ITV1 and PBS. If you’re interested in pre-ordering an ebook copy of the first installment, here is the direct link: http://bit.ly/HomeFiresReturns.

Homes Fires concludes Sunday, May 7 on PBS’ Masterpiece and Sunday, 8 May at 9pm on ITV1 and .