Ditching his signature Ford Cortina and Audi quattro for an RV Park, DCI Gene Hunt will soon be Living the Dream in an upcoming new comedy for Sky1. Philip Glenister (Life on Mars, Ashes to Ashes, Mad Dogs) and Lesley Sharp (Scott & Bailey, Afterlife) as Brits abroad in the new Sky1 comedy drama, Living the Dream. The pair play Mal and Jen Pemberton who decide to up sticks from Yorkshire and start a business renting trailers in Florida. Along for the ride are their teenage children Tina, played by Rosie Day, and Freddie, played by Brenock O’Connor, familiar to Game of Thrones viewers for his work as Jon Snow’s apprentice-turned-betrayer Olly. 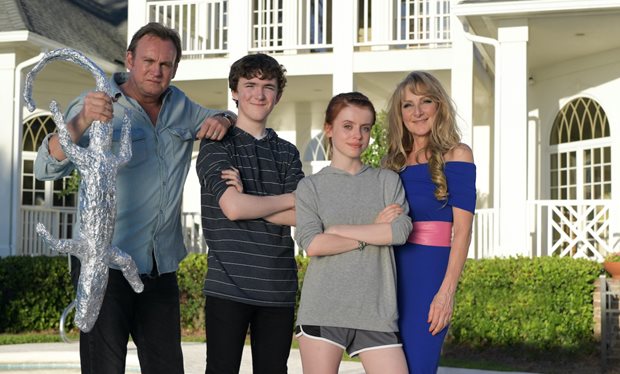 As you can probably guess, the Pembertons’ dreams of a Florida paradise quickly turn into nightmares in the face of hostility from their largely blue collar clientele and interesting new habits. Aside from the sheer greatness of the two leads of Glenister and Sharp, the supporting cast is ‘interesting’ to say the least. Kim Fields (The Facts of Life) plays their larger than life neighbor Rhoda while Kevin Nash (Magic Mike) is ex-wrestler and park resident Troy with Leslie Jordan (Will & Grace) taking on the role of another resident, busy-body Aiden.

In addition to Mal Pemberton (Glenister) trying to navigate the joys of RV Park ownership, Jen has to learn how to survive American suburbia while the kids have to navigate an American high school. In true ‘Gene Hunt fashion’, Glenister said: “Really looking forward to making Living the Dream a reality! Along with a hugely talented cast and crew! Fire up my trailer park!”

Living the Dream is expected to air early 2018 on Sky1 with, hopefully, a public television airing not too long after.