When series 2 of returns to PBS in October, fans of the series will see Louisa Durrell (Keeley Hawes) come up with a brand new idea to generate income, as hardline new landlady Vasilia demands more rent money and the family struggles to scrape a living. The English widow decides to make some English delicacies such as toad in the hole, Bakewell tarts, spotted dick, scotch eggs and take them by donkey to the local market. 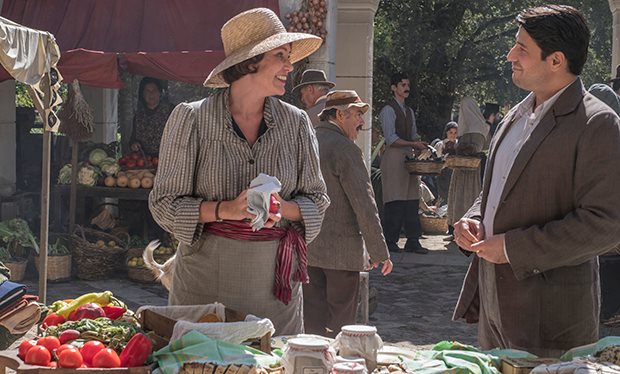 After producers recently released some behind the scenes footage, it’s clear that the only thing harder than selling Scotch eggs in Corfu was for producers to find the right marketplace to film. “We were looking for a village in Corfu that was controllable, that we could shut off streets, we could film with horses and extras, we wouldn’t need to worry about people going backwards and forwards,” explains executive producer Sally Woodward Gentle.

“When we were doing the recce we never found the village. And then one day Chris Hall – who’s the producer – and Steve Barron [the director] were actually wandering around the Corfu Museum of Banknotes, and came across a volunteer and explained what they were doing, said Gentle. “She said, ‘You must go and see my village!'” Sally recalls. “They had built a replica of Corfu Town.”

Interestingly, Bouas village, also known as Danilia, was also used in the James Bond movie For Your Eyes Only back in 1981. It was built by a Mr I Bouas from the ground up as a way of capturing and preserving the island’s traditional atmosphere. Thankfully, the producers found the village just in time….

The Durrells returns to PBS’ Masterpiece for series 2 beginning October 2017.