Unimpressed by the quality of dancing on Strictly Come Dancing, don’t expect to see Aidan Turner anytime soon tripping the light fantastic on the popular television dance competition. The long-running BBC1 series, which features contestants, celebrities and individuals from all walks of life, paired with professional dance partners competing in a Survivor-like, weekly voting contestants off the dance floor/island, Ballroom and Latin dance competition. 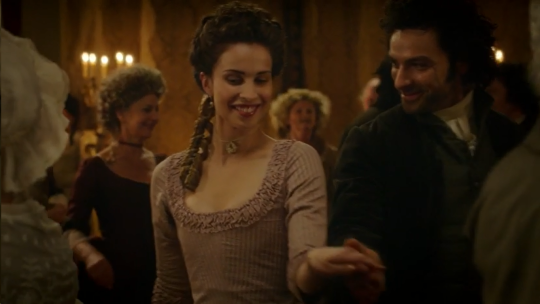 Turner, who stars as Captain Ross Poldark in the equally as popular Poldark on BBC1, recently referenced the dancing on Strictly as not being very good. Actually, he said it was ‘rubbish’, saying it was not at all about the dancing but more of a reality series. “I hate it. God, I hate watching it now, I can’t stand it really,” he told the Radio Times.

Rest assured, Turner knows of what he speaks having taken up ballroom and Latin American dancing at the age of six in addition to representing Ireland for ten years as a competitive dancer, once placing third in the All-Ireland National Dance Championships.

Fans of the series might recall that Turner’s fancy footwork is showcased in episode 2 of series 1 as Ross (Aidan Turner) has returns to Cornwall from the battlefield only to find his father dead. He is determined to re-open the family mine with Frances while Demelza struggles to fit in at Nampara. In this behind-the-scenes nugget, the cast had assembled to film a formal ballroom scene upon Ross’ return but instead of traditional 18th century music, the cast was immediately transported into the 20th century with a bit of Mas Que Nada blasting out, inspiring not only an impromptu dance Kodak moment during which Turner took the lead with ease but probably a few needed laughs after long days of filming.

“I don’t know if I’m eligible because I used to compete at an amateur level. I think you need to be, like, a raw beginner,” Turner said. “They haven’t asked me, no. And just for the record, I wouldn’t do it.” With SCD out of the picture, the good news for us all is that this means there will be more time in what, I’m sure, is a very busy schedule to film more seasons of Poldark in the future!

Series 3 of Poldark returns to BBC1 in June and in October 2017 on PBS!