With the third series of Poldark set to premiere on BBC1 beginning this Sunday (11 June) and on PBS beginning Sunday, October 1, word on the street is that series 4 is in the works and will head to the beautiful Cornish coast and begin filming in September. Aidan Turner (Capt Ross Poldark) confirmed there would be a series 4 at the recent BFI & Radio Times Television Festival’s Poldark panel back in April of this year. The official Poldark Twitter account then confirmed not long after much to the delight of both Winston Graham and Poldark fans worldwide. 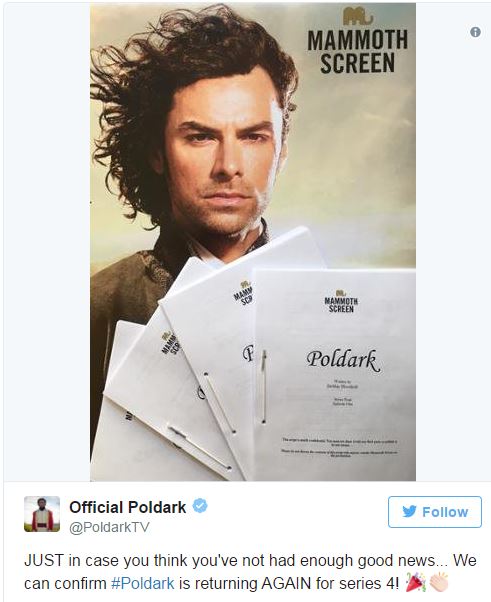 Series 3 is getting an earlier start date (June 11) on BBC1 than last year’s Autumn S2 premiere in order to avoid an ill-fated head-to-head competition with ITV’s Victoria, which will most likely have its second series premiere in September in the UK.

The fact that there seems to be no end is sight is brilliant news not only for Poldark fans but also for series star Aidan Turner, who previously said he’d be happy to stick around for many more series of the show just so long as the quality is as high as we’ve come to expect it to be. “The standard on Poldark is so high and you need to keep it high,” he said. “But if it continues to be where it’s at, I can’t see a reason why we wouldn’t continue,”.

The series is based on Winston Graham’s novel series, which features 12 books in total. And considering the third series will take us through books 5 and 6 (The Black Moon and The Four Swans), it looks like we’re pretty much in it for the long haul here.