Michael Bond CBE, the author and creator of Paddington Bear, the marmalade-loving bear from ‘deepest, darkest Peru’ who comes heads to London (by Aunt Lucy) in his iconic old hat, ruffled coat, wellingtons and a battered suitcase to live, has died at the age of 91. Bond published his first book, “A Bear Called Paddington”, in 1958.

As the story goes, Bond, who was working as a BBC cameraman and engineer, based Paddington Bear on a lone teddy bear he noticed on a shelf in a London store near Paddington Station on Christmas Eve 1956, which he bought as a present for his wife. 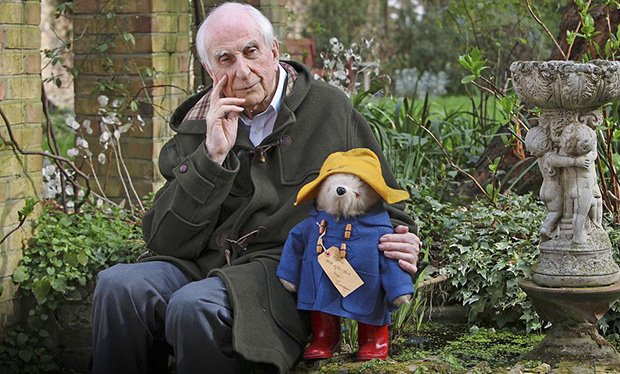 Hugh Bonneville is reprising his role in Paddington 2 as Mr Henry Brown, the hapless City of London worker who, with his wife, Mary, find the lonely bear at Paddington railway station sitting on his suitcase with a note attached to his coat that reads “Please look after this bear. Thank you.”. The star of Downton Abbey and W1A learned of Bond’s death on the final day of filming of the upcoming sequel.

“In Paddington, Michael created a character whose enthusiasm and optimism has given pleasure to millions across the generations,” said Bonneville. More than 35 million Paddington books have been sold worldwide. The most recent, “Paddington’s Finest Hour”, was published in April.

The full interview for the British Entertainment History Project with Paddington creator, Michael Bond, can be seen here.