Should you find yourself in need of a British comedy binge fix, check out Whites, the 2010 BBC 2 comedy starring Alan Davies, Darren Boyd and Katherine Parkinson. Set in the kitchen of a country house hotel, Whites has Davies playing Chef Roland White, a culinary genius of a chef that, in foodie terms, is several days past his sell-by date.

Inexplicably, Whites was not renewed by the BBC for a second season so six episodes is all you are going to get. I know, it’s been 7 years, I need to get over it but when I see the likes of Two Pints of Lager and a Package of Crisps get 10 series, you have to wonder what goes through the minds of comedy commissioners. 99.9% of the time it’s money. In the case of Whites, the £3 million cost for the one series might have been just a bit too much to justify a second series. Whatever the reason, the six episodes that exist are brilliant. 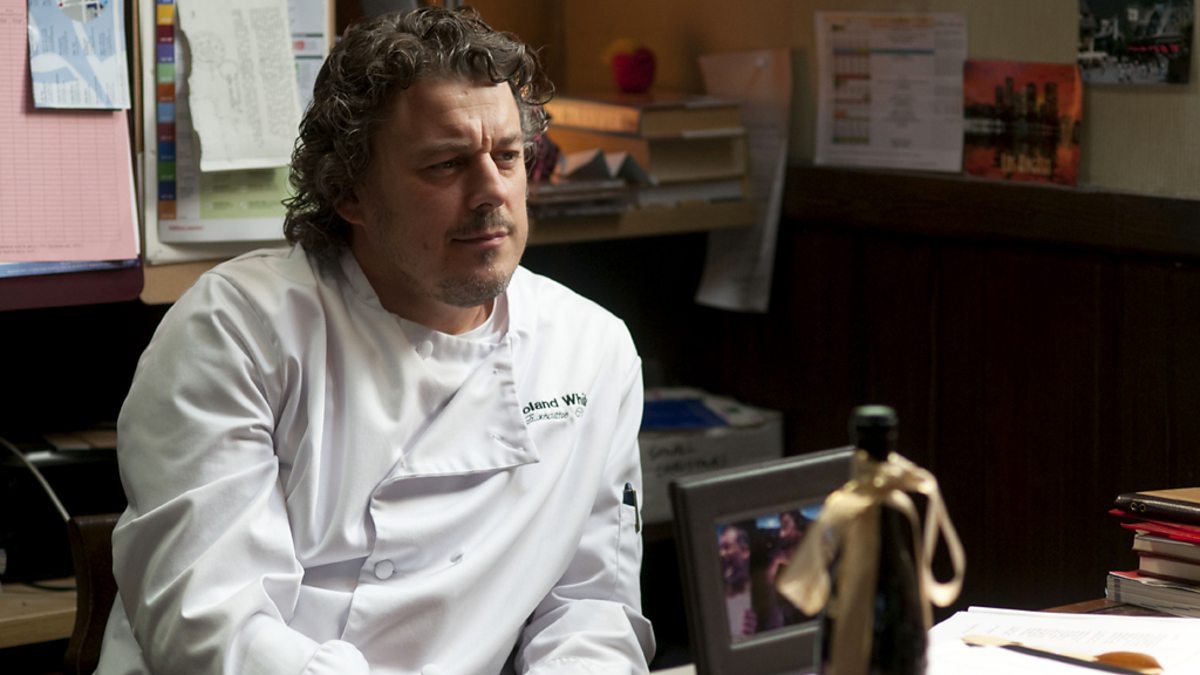 Chef wants that coveted Michelin star as much as another brilliant chef many of us are familiar with, Gareth Blackstock, he just doesn’t quite have the motivation to go out and get it. While you get the sense that White could launch into his greatest Blackstock impersonation at any moment when a vegetarian won’t eat his carefully crafted dishes, laziness just keeps getting in the way.

Whites was written by Matt King and Oliver Lansley. King, probably known more widely for his acting in the British comedy Peep Show, wrote Whites from his personal restaurant experience. Besides the superb writing, two things that really cause Whites to stand out for me is the mockumentary / hand-held camera look and feel of the series along with the training that the cast went through over the watchful eye of the chefs at Jamie Oliver’s London Fifteen restaurant to get the feel of being in a working kitchen. While none of the cast will ever make a living in the kitchen, it’s obvious, just as it was in Chef! that the principles do know their way around the kitchen enough to be dangerous.

From the outset, it’s clear that both the food and the kitchen were very important to both Oliver Lansley and co-creator/writer, Matt King. Having worked in a kitchen, King was very aware as to what makes up a “working kitchen”. According to Lansley, “…the kitchen in effect an extra character in the show and we felt that if we could get this right and make this real, then it would give us much more freedom to focus on our characters and their stories. I think that’s something that follows through with situation comedy as a whole, the more authentic and clear the situation the more you can forget about it and focus on the comedy.”

Now that the kitchen was “authentic”, the focus turned to the food. Real chefs were hired on as consultants, reading scripts and flagging anything that may call into question a lack of kitchen knowledge. In addition, an on-set chef prepared all the food cooked on the show in order to get the look and design of food prep down.

So, the next time you sit down and enjoy your favorite comedy whether it’s set in a kitchen, department store or small town parish, you can now appreciate the great lengths producers go to for both authenticity and laughs.