In the opening episode of Red Dwarf XII, airing this Fall on Dave, the three non-Kryten crew members of the Jupiter Mining Corportation are turned into mechanoids just like Kryten. Understandably, the boys had a differing view of the situation depending on whether or not you have played Kryten or…well, have not. Rather than turning a playful deaf ear to Robert Llewellyn as he would casually mention over the years how much he had endured for the cause for the past 28 years, it was clear from the outset that the non-Kryten’s had a newfound respect for Robert Llewellyn, who has played the on-board Series 4000 service mechanoid for the past 28 years.  “28 years of guilt, of calling him a big wuss. We literally went out bowing to [Rob], because it was amazing, ” said Danny John-Jules. 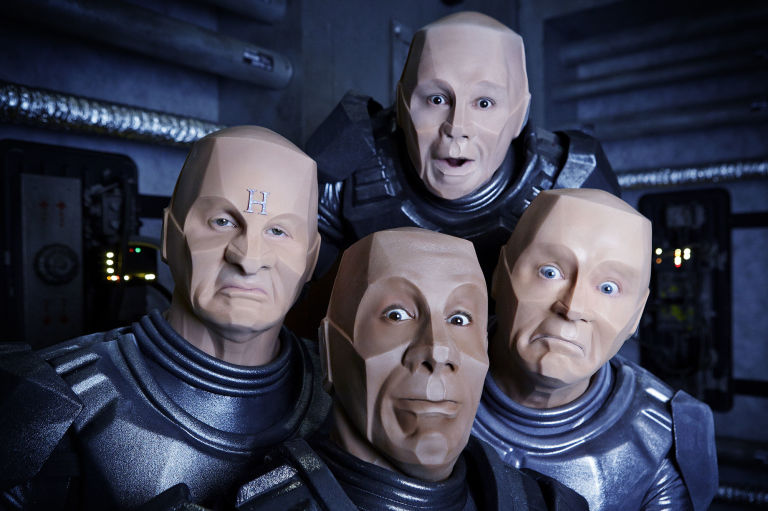 Danny John-Jules, who plays The Cat added: “It was quite disturbing. The thing was we could only see your eyes, scary it actually looks like you in the mask. We ended up in the scenes, kind of staring at each other. The problem was, the sweat sort of collects under the mask but outside it was about -5 degrees, so we’d run out to get fresh air and then nearly die of pneumonia!”

Craig Charles. who plays Lister, said: “It was so uncomfortable, so hot, I thought I was crying at one point but I wasn’t, I was sweating through my eyes! Chris (Barrie) got ill wearing it. We had a whole new respect for Rob. Yeah, I thought just get on with it, you wuss. 28 years of guilt, of calling him a big wuss. We literally went out bowing to (Rob), because it was amazing.”

Chris Barrie. who plays Rimmer, said: “It was brilliant in the morning, wasn’t it, but over lunch, sitting in it and waiting is always the hardest  bit. When you’re working I’m not bothered about it, but when you’re having to wait, and you’re in the mask and you can’t do anything, you’re thinking ‘is this going to come off?!’

For Llewellyn, the view from behind the rubber mask was a bit disconcerting. “It was just the weirdest thing, they were absolutely them but they were all mechanoid versions of them, there’s no way of describing it.”