It was ‘Bring your Granddad to Work Day’ recently during the filming of series 2 of Victoria when Jenna Coleman’s grandfather appeared on the set recently in period garb. While he won’t be playing her character’s grandfather, George III, Coleman’s real-life grandfather will be featured as an extra in the period drama as ‘man in crowd’. 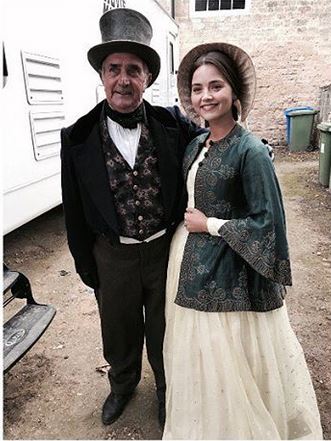 Coleman posted the above pic on her Instagram page which also gives viewers a hint as to where series 2 will be going. It appears as if Victoria is expecting another child which should be, if you’re keeping score at home, Edward or, baby number two (of nine overall). Remember, the young Queen gave birth to her first child, Victoria, at the end of series one.

Victoria S2 returns this Autumn on ITV and January 2018 on PBS’ Masterpiece series.