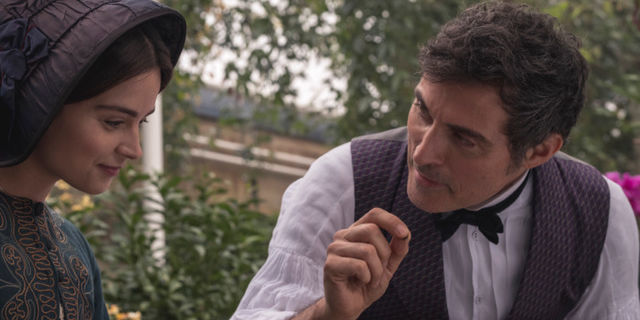 While viewers across the UK were ecstatic and feel that ‘everyone needs a Lord M in their lives’, Prince Albert not so much. Seems as though Victoria is struggling to balance life as a wife, a mother and the Queen and so she turns to her old friend for advice after she was worried Albert was attracted to Lady Lovelace.

Rufus Sewell briefly talks about his return on Sunday

How did you feel returning to the role?

“One of the things that appealed about the role originally was that it was finite; a lovely contained story with a beginning, middle and end. I really didn’t want Melbourne to be hanging around beyond the natural span of his story. All the same, I knew that if all went well, I’d probably regret leaving when it came to it and it turned out I was right. When the producers came to me with a way to bring him back in season two that was still true to the story, I was only too happy to come back.

So what’s in store for Lord M in series two?

“What wouldn’t work is trying to repeat the situation and the dynamic that Lord M and Victoria had in series one, fun though it was to play. That had to end and by the time Albert arrived Melbourne’s role and the nature of his relationship with Victoria had changed as it should.  After that Melbourne, who had always been a very vital man, changed  and aging caught up with him relatively quickly so what was interesting was navigating his changed relationship with Victoria and also with Albert. There had been a certain level of imagined antagonism to start off with but actually in reality they liked each rather a lot once the original suspicion went away so it was lovely to come back to work a little more with Tom Hughes.”

But did Rufus feel the need to delve once more into the history of the period?

“I did so much reading on the subject for the first season – One of the things I enjoy about my job is that it gives you an excuse to learn new things, so I read a hell of a lot about him, about Victoria and the period. The hope being, that more you absorb, the greater your understanding of people and it’s a great reminder of how people, don’t essentially change from time to time or place to place. But then there comes a point when you have to put that aside, and just get on with being there. All the same, It was very refreshing to go into Victorian England and Melbourne’s history because I had just come from being immersed in rather the brutal alternate history of Man in the High Castle…!”

Victoria continues Sundays at 9p on ITV and returns to PBS on Sunday, January 14, 2018