Social media has a way of setting the Internets on fire with a cryptic message under 140 characters. That was the case on Monday when the ITV show’s social media sent Downton Abbey-Nation into a frenzy after posting an uber-cryptic social media post teasing an announcement was coming very soon. “Something Big is Happening at Downton!” is playing havoc with fans of the British period drama as we speak. 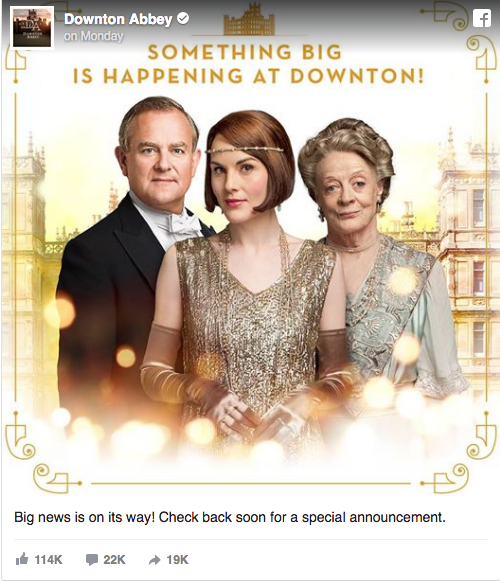 Unfortunately, no one knows of what ITV speaks at this time. Every since Downton shut its doors in 2015, there has been talk of a movie that has made its way around the Internets, brief mentions of the cast reuniting for another series (which seems entirely doubtful given insane schedules for all those involved) and/or a prequel with an all-new cast. There was even one report of Mr. Bates and Anna leaving Downton to open up a Bed & Breakfast called The Bates Motel. Ok, maybe that one never reached the rumor stage but it would be a fun one given their respective questionable backgrounds concerning the demise of Mr. Green.

Supposedly, Sir Julian Fellowes has written a script even though much of the cast continues to question whether or not it will happen even though they have been told to ‘keep dates clear’. And, it was the Dowager Countess herself, Dame Maggie Smith, who thought a movie might be squeezing it dry even though she felt her character’s death could be the event that would ‘sets the plot in motion’.

Whatever the case, it would be good to have Downton’s doors open once again for a movie, new series, prequel or whatever is in Sir Julian’s mind palace. Just do it soon, ok?