Thanks to a bit of a recent nudge from Tom Ellis, a.k.a. Gary Preston, the brilliant mind palace of Miranda Hart has begun to consider bringing back her semi-autobiographical sitcom, Miranda. Originally conceived as a BBC Radio 2 comedy series Miranda Hart’s Joke Shop in 2008, the BBC2 (then BBC1) series ran for three series from 2009-2015. 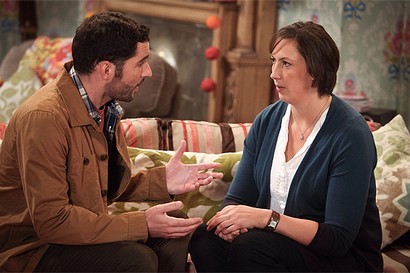 Ellis, who currently stars as a somewhat bored and unhappy ‘Lord of Hell’ who resigns his throne and abandons his kingdom for the bright lights of Los Angeles in the Fox television series Lucifer, suggested as early as 2016 that he would be open to a return to the series as some point. “We would love to revisit them (Gary and Miranda) at some point.”  Ellis added, “Obviously we bookended the series quite nicely and I think where do we go from here in terms of their story and the idea of them in their married life with children is something we’d like to explore.”

Speaking on BBC’s The One Show, Hart seemed to “what we call” confirm she’s now thinking about a re-boot. “The lovely Tom Ellis was saying… that he’d like to see Miranda and Gary married,” Hart said. “Now he’s got me thinking! There’s a thought there, to explore the comedy of marriage. Particularly early life marriage and how that would work. I’d quite like to see that,” added Hart.

Hart also revealed to The One Show viewers that she very nearly made the 2-part Miranda finale a movie, but changed her mind when Dad’s Army creator Jimmy Perry told her it wouldn’t be a good idea. Perry, who passed away in 2016 at the age of 93, created the late 60s sitcom, Dad’s Army, which was the basis for the 2016 feature film starring Bill Nighy, Catherine Zeta-Jones, Toby Jones, Michael Gambon and Daniel Mays.

“I was deciding which way to go with it,” Hart explained. “The two finales that I wrote were really a film story, and it could have gone either way. But I felt like it was right to honor the television audiences and all of the people who’d supported it.”

Selfishly, let’s hope she continues to honor the television audiences and the people who has supported the series from the beginning by bringing it back as soon as possible. Until the, we’re going to have to ‘bear with’ for a bit longer.