While it might be a bit like the Beatles reuniting without Ringo Starr, at long last, Mary Berry, Mel Giedroyc and Sue Perkins are getting the Bake Off band back together for a one-off Christmas special. For those that have been in denial since Paul Hollywood, the fourth member of the band packed up his tent and moved with the show to Channel 4, the reunion will mark the first time the trio have worked together since they departed the Great British Bake Off last year. 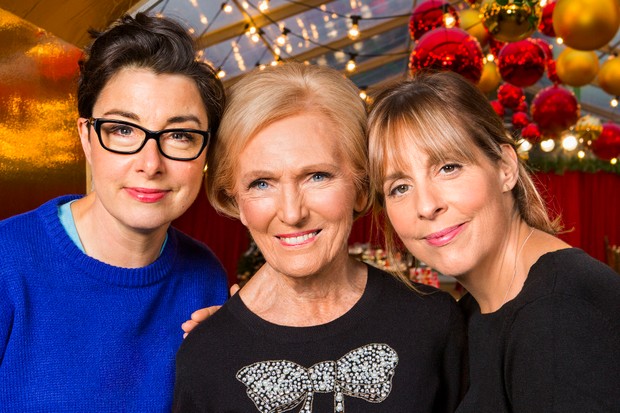 In a bit of a departure from their original act, BBC1’s Surprise Party will see the trio getting together to bring some festive cheer to an area that has experienced tough times. Mary, Mel and Sue will pay a surprise visit to a community center in South Wales, which has become a lifeline for young children and pensioners after the closure of their local school and post office.

According to BBC press material, the volunteers at the center will get the ‘shock of their lives’ when the former Bake Off trio turn up to throw ‘the most magnificent Christmas party the town has ever seen’. Mary, with local helpers as her sous chefs, will cook a traditional Christmas dinner, while Mel and Sue will stage ‘a magical back drop to the party’ and give the community center a complete makeover.

While this holiday one-off will bring a community together and celebrate those who go out of their way to help their neighbors, let’s hope this is only the start to a lengthy Mary, Sue and Mel reunion tour. Now, if only Rod Stewart, Ronnie Wood and Kenney Jones would reunite Faces, it would definitely be a Merry Christmas for all!