Ever since the 2005 revival of Doctor Who when Christopher Eccleston took the keys to the TARDIS as the 9th incarnation of The Doctor, I have followed with great interest how time pretty much stops like in The Day The Earth Stood Still when a new Doctor or companion is announced. I’m sure it was similar with Doctors 1-8 but without the Internets, it’s hard to tell. 2017 turned out to be no exception with the long-overdue news that Broadchurch‘s Jodie Whitaker would take over as the 13th Doctor becoming the first woman to guide the Tardis through the universe beginning in 2018. Now that we have that finally out of the way, The Doctor’s got a brand new look…and, we like it! 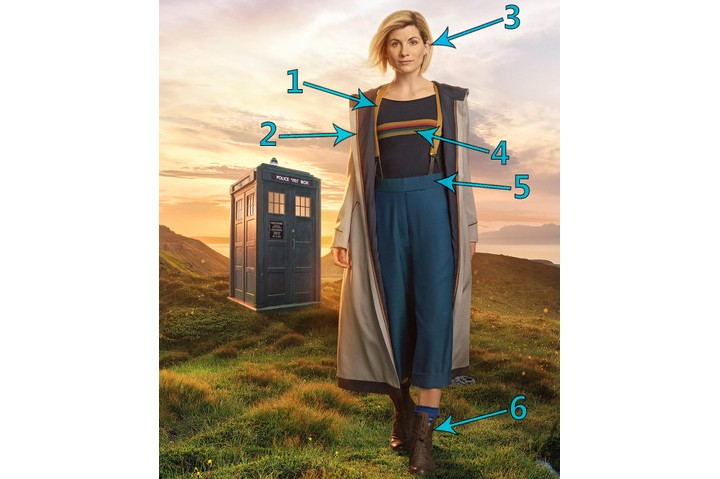 At first glance, it’s really different from the modern era look of Doctor’s 9-12. Different as in no sonic glasses, no leather jackets, no bow ties and no Converse sneakers. At the same time, while quite the different look, there are a number of interesting similarities to Doctor’s past and a few other alien creatures along the way. Radiotimes.com has put together a deep dive analysis of Whitaker’s ‘look’ which includes braces, boots, stripes, coat and high waist trousers. The two best comparisons in my book include the one that shows the t-shirt strips bearing a striking resemblance in color to Tom Baker’s scarf and the braces coupled with the high trouser look that is a bit of a tip of the hat to Robin Williams’ character Mork from U.S. sitcom, Mork and Mindy.