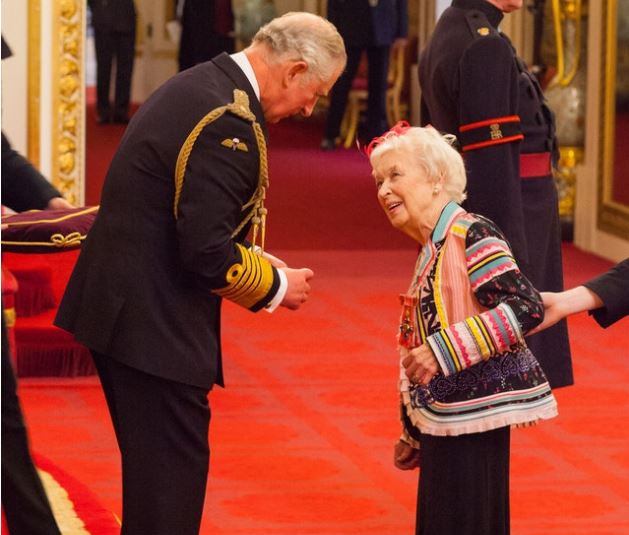 While the news that June Whitfield had officially become a Dame Commander of the British Empire in the Queen’s Birthday Honors List at Buckingham Palace must have driven Pats and Eddy to drink even earlier in the day, there couldn’t be a more deserving individual to receive such an honor. Best known for her role as Edina Monsoon’s mother in the British comedy series, Absolutely Fabulous, or AbFab, Whitfield, the former Carry On films actress, began her over seven decade acting career in radio in the 1950s before landing regular roles in Roy Clarke’s Last of the Summer Wine and The Green Green Grass. In the 90s, the newly named Dame was also the regular voice of Agatha Christie’s Miss Marple on BBC Radio 4.

At 92, Whitefield was given the honor by the Prince of Wales on Thursday for services to drama and entertainment. Dame June told the Press Association: “It’s absolutely remarkable. One feels so honoured and proud. It takes a lot of getting used to.” In true June Monsoon fashion, when asked about any future career plans she said: “It just depends, I think I’m now more suitable for a role that takes place in bed or in a wheelchair or something so there’s not too much walking about.”

Whitfield now finds herself in great ‘Dame’ company alongside Judi Dench, Patricia Routledge, Diana Rigg, Maggie Smith, Eileen Atkins, Julie Walters, Helen Mirren and Angela Lansbury among others. While Pats and Eddy really don’t need much to make them pop the cork a bit earlier in the day, Saffy must be so proud of Grandma!