At long last, Doctor #1 and Doctor #12 team up in the 2017 Doctor Who Christmas Special, “Twice Upon a Time”, Peter Capaldi’s final adventure as the Twelfth Doctor. Doctor’s #1 and #12 will be joined by the return of Pearl Mackie, a.k.a. Bill, not ‘CyberBill’, and Mark Gatiss as a World War I soldier known as ‘The Captain’. David Bradley recreates his brilliant portrayal of Doctor #1, originally played by William Hartnell. 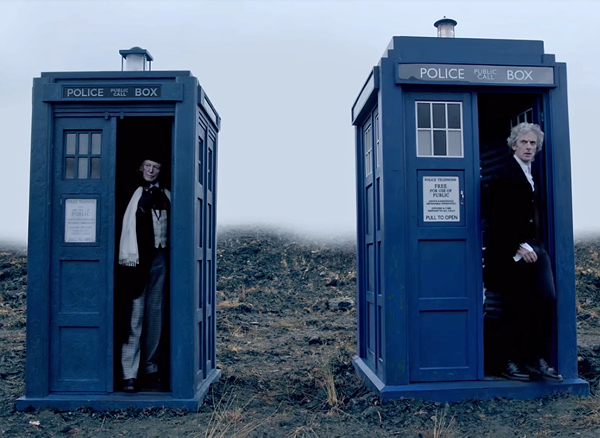 It’s a classic meeting to remember of the two Doctor’s beginning with #12’s snowy planet initial declaration of “I’m the Doctor”. Without missing a beat, #1 counters with ““The Doctor? No, I don’t think so. No. Dear me, no. You may be a Doctor. But I am THE Doctor. The original, you might say.“. Who better to help the Twelfth Doctor through his regeneration hesitation but the one that started it all, THE Doctor.

While this will be the sad moment this Christmas that we’ve all been in denial about, this looks to be a brilliant sign off to the Peter Capaldi era and a perfect way to usher in the Jodie Whitaker era as the Thirteenth Doctor! “Twice Upon a Time” also brings to an end the Steven Moffat era as he turns over the keys to the TARDIS to former Broadchurch showrunner, Chris Chibnall, who starts series 11 in 2018 with a clean slate, a new Doctor and new companions all around.

Doctor Who “Twice Upon a Time” airs Christmas Day 2017 on BBC1 and BBC America.