When  the BBC drama series Death in Paradise suspended filming in Guadeloupe in the Caribbean because of a red alert issued over the dangers posed by Hurricane Irma, the hit comedy/drama/mystery series’ scheduled return in January 2018 was, understandably, up in the air. Thankfully, it’s going to take more than the most powerful hurricane ever recorded over the Atlantic Ocean to delay the series 7 premiere on Thursday, 4 January 2018 on BBC 1. 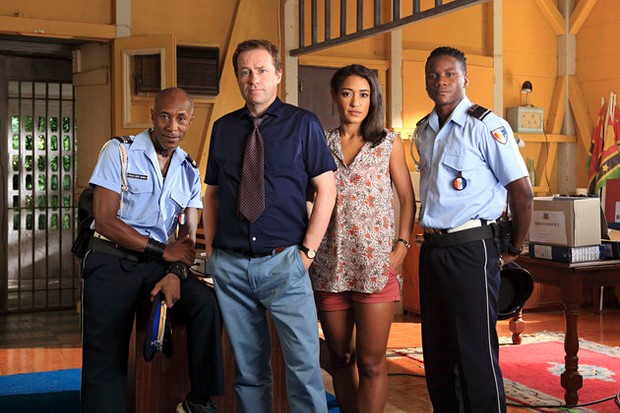 Brexit, which could end up being more powerful than any hurricane to the television production industry, could spell the end of Death in Paradise if the United Kingdom leaves the European Union without negotiating a deal. “Guadeloupe is an overseas territory of France, so it’s part of the EU, which makes it really easy to film there,” said series writer and creator Robert Thorogood.

Series seven of Death in Paradise will be Father Ted star Ardal O’Hanlon’s first full series as DI Jack Mooney, chief investigator on the fictional Caribbean island of Saint Marie. O’Hanlon took over as lead from Kris Marshall at the end of series six. Experiencing a much better fate than his predecessor on the island, DI Richard Poole (played by Ben Miller), Marshall’s DI Humphrey Goodman resigned in series 6 so he could stay in London with his new girlfriend Martha Lloyd.

Returning alongside the islands newest DI are Josephine Jobert, Danny John-Jules, Tobi Bakare, Elizabeth Bourgine and Don Warrington. For series 7, DI Jack Mooney is adapting to island life while also playing poker masterminds at their own game and uncovering secrets and lies within a famous reggae band, while DS Florence Cassell (Josephine Jobert) tackles runaway suspects. Romance could be in the air for Officer Dwayne Myers (Danny John-Jules), while a secret from Officer JP Hooper’s (Tobi Bakare) past returns to haunt him. Oh, and there’s the traditional DIP rundown of guests stars, death and paradise too!