While it may be difficult for some to come to grips with the fact that Doctor Who  premiered some 55 years ago in 1963, it’s a bit more difficult for me to grasp that Blake’s 7, the creation of Terry Nation (who had already wreaked havoc on The Doctor with his creation of the Daleks), has just turned 40! The BBC primetime science fiction series premiered on Monday, January 2, 1978 and ran for four seasons totaling 52 episodes. 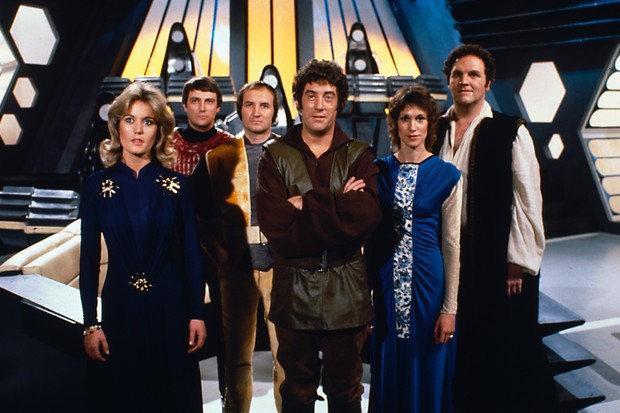 Saddled with a production that, like the Grinch’s heart, was two sizes too small, Blake’s 7 quickly gained a more than respectable audience following in excess of 10 million viewers weekly during its run on BBC1. Wrongly cited (IMHO) by one critic as being ‘classically awful’, the series did seem to always be clawing their way uphill against the grain not only due to the small budgets but also some major cast changes as Gareth Thomas (Roj Blake) and Sally Knyvette (Jenna Stannis) left after series two.

That said, there’s a lot to really love about Blake’s 7 which benefited greatly from both having a number of BBC talent that got their starts working on Doctor Who but also good writing and characterization. Being given the time to develop was also a big key to its success. While it might have been viewed as a bit of a misfortune to premiere within a week of the UK release of that other small-budgeted science fiction feature, Star Wars, the series had something in its corner that George Lucas’ film didn’t have — time. In 1978, producer David Maloney told Radio Times: “We’ve got something Star Wars doesn’t have – time to develop our plot, characters and action. They’ve got two hours we’ve got 12.”

Pitched by Nation to the BBC as “The Dirty Dozen in space”, the series was heavily inspired by a number of other classic films including The Magnificent Seven, Butch Cassidy & the Sundance Kid, The Wild Bunch and 1984.