Wendy Craig, best known for her late 70s / early 80s role as Ria Parkinson, Geoffrey Palmer’s frustrated wife and Nicholas Lyndhurst’s mother, in the Carla Lane comedy, Butterflies, is headed to Emmerdale. The 83 year-old  actress will arrive in Emmerdale on Monday as the ‘fun-loving’ Maisie, the love interest of Sandy Thomas, played by 90 year-old Freddie Jones. 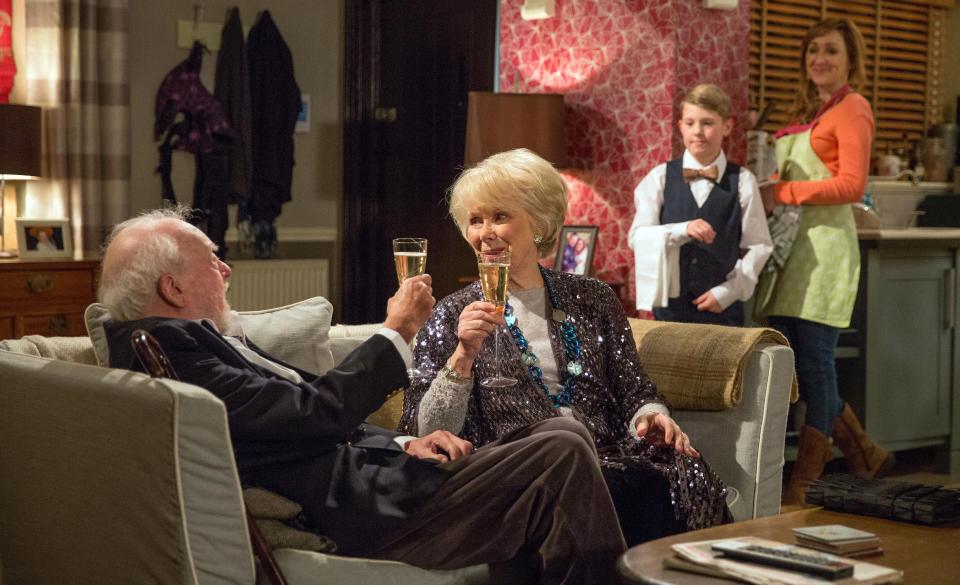 Arriving on a tour bus on behalf of friend, Betty Eagleton, ‘Maisie’ heads for Mulberry Cottage for the sole purpose of passing on some gifts to Sandy. In true soap opera fashion, they head to the Woolpack and as Maisie begins to hit it off with Sandy, the misses her tour bus out of town and, surprise, needs to stay awhile. Jones, who will end his 13-year gig on Emmedale next Friday, 16 February, announced his decision last week citing the stress of commuting to the set as the primary reason for his decision to leave the Dales.

“I travel three hours by car, book into a hotel and then get up the next day to say maybe three sentences. And then do a three-hour journey back. I can’t justify staying, even though Emmerdale was very generous in asking me to,” said Jones. “It’s about the balance of my life,” the actor told Radio Times.

Sadly, Craig’s appearance in Emmerdale will be short-lived, however, as she will announce she’s heading ‘down under’. Whether or not Sandy will leave his grandchildren behind and follow her to Australia is not known as of yet. What is known, however, is that as of Monday, 19 February, Sandy Thomas and Freddie Jones will bow out of Emmerdale for the last time.

Wendy Craig arrives in the Yorkshire Dales on Monday, 12 February on ITV.