At long last, the televised version of the London stage play, Hamlet starring Andrew Scott, is headed to BBC2 on Saturday, 31 March. Scott, who was introduced to the masses with his brilliant portrayal of Jim Moriarty in Sherlock, recently followed in some pretty big footsteps of those who have previously played the Prince of Denmark including Benedict Cumberbatch, David Tennant and Tom Hiddleston. After a sellout 2017 run at the Almeida Theatre in London, Olivier Award-winning director Robert Icke’s staging of Hamlet set in a modern-day Denmark transferred to the Harold Pinter Theatre in London’s West End in mid-2017. 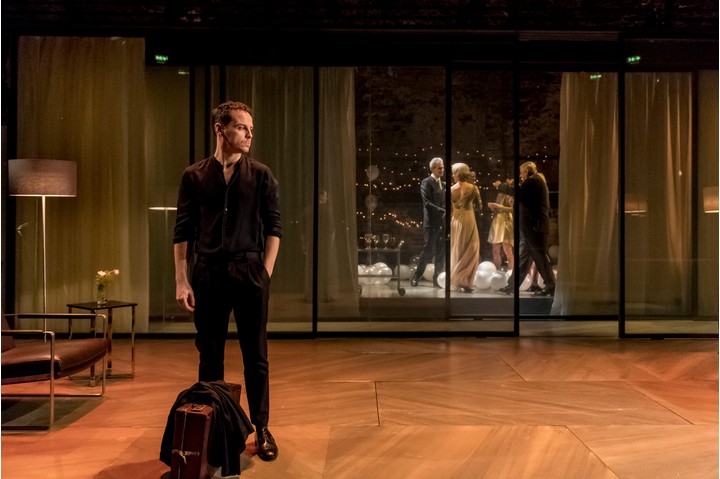 The Sherlock actor, who took the character of Jim Moriarty to levels that most Sherlock Holmes fans have never seen before, stars alongside Angus Wright (Peep Show), Downton Abbey‘s Jessica Brown Findlay and Juliet Stevenson (Accused) in Hamlet. The combination of Scott’s performance, which has been called ‘utterly thrilling’ and a ‘set in modern day Denmark’ adaptation of the Shakespeare tragedy, affords the opportunity for both a wide and diverse audience when it transmits on BBC2 this Easter eve. Remembering the sheer intensity that Andrew Scott brought to Moriarty, one can only imagine the heights he takes Hamlet to when it becomes time to wreak upon his uncle, Claudius, after he murders his own brother, seizes the throne and then marrying his deceased brother’s widow.

Hamlet with Andrew Scott airs on BBC2 on 31st March at