On January 2nd, 2018 during the Queen’s New Years Honours List reveal, it was confirmed the Richard Starkey, a.k.a. Ringo Starr would be knighted. On Wednesday, Starr was finally able to join fellow Beatle Sir Paul McCartney in knighthood twenty-one years after McCartney was knighted in 1997. Prince William, the Duke of Cambridge, knighted Starr at a ceremony in Buckingham Palace 53 years after The Beatles received MBEs in 1965. 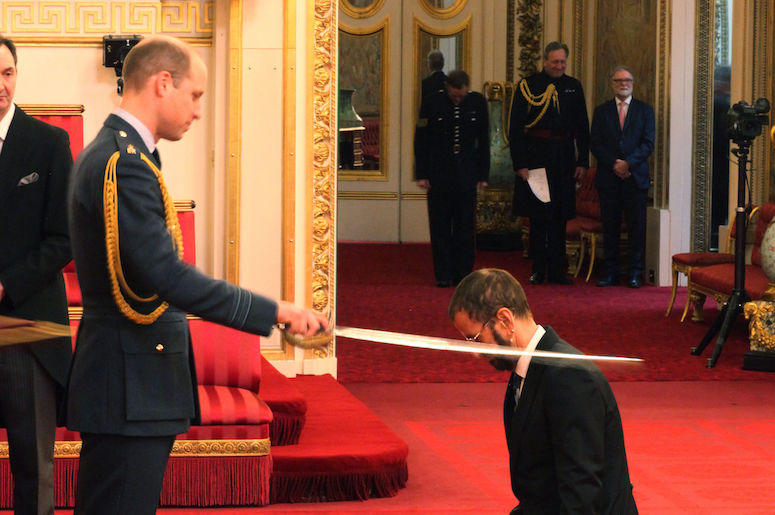 Established by King George V, the awards were originally meant to honor top-notch civilian and military behavior in wartime but it quickly expanded to include peacetime achievements as well. The Order has five separate ranks: Knight and Dame Grand Cross (GBE), Knight and Dame Commander (KBE and DBE, respectively), Commander (CBE), Officer (OBE), and Member (MBE). Achieving one of the first two ranks earns a person a slot in the knighthood, which means they can add “Sir” or “Dame” to their names.

Starr, the Liverpool-born drummer who joined the Beatles in 1962, seemed visibly moved by the honor. “It means a lot actually,” the musician told the BBC. “It means recognition for the things we’ve done. I was really pleased to accept this. I’ll be wearing it at breakfast,” he joked. Sir Paul, who once said the Beatles weren’t ‘the Beatles’ until Ringo joined the band, had some very simple advice for his friend and former bandmate last week prior to his receiving the honor, “Keep smiling.”