Stemming from an earlier conversation between the legendary Dame Helen Mirren and the brilliant host of The Late Show with Stephen Colbert about what makes them cry, the legendary actress indulges the late-night host with a reading of lines from the poem ‘Ulysses’ by Alfred Lord Tennyson. 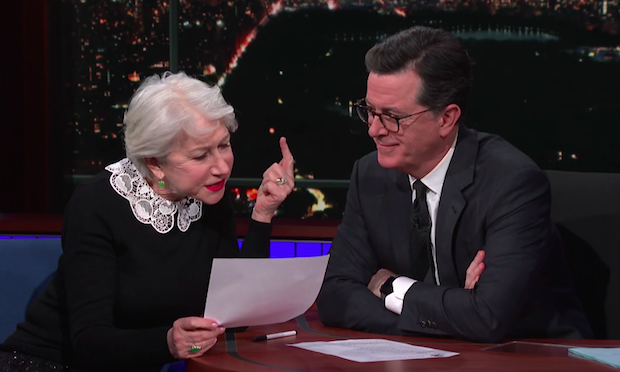 Ok, it’s not a full-blown tearjerker, but if the poem doesn’t get you, watching the greatness of Stephen Colbert fight back tears probably will. As Mirren performed the dramatic reading, probably a first for late-night television, Colbert looked visibly moved. At the end of the reading, Colbert said, “You got me.” “Made me cry, too,” Mirren responded.

After her late-night performance, Dame Helen Mirren is getting dangerously close to Bill Nighy territory in my book. Either one could read the phone book on stage and I’d pay to see it.